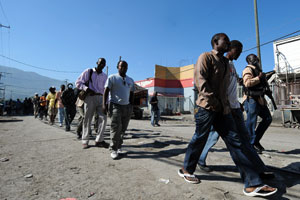 Just days after Haiti was devastated by a powerful earthquake, The Nation reports that some of the same private security companies operating in Iraq and Afghanistan are preparing to set up shop in the Caribbean nation.

A trade group representing military contractors and private security firms, the International Peace Operations Association, has launched a Web site for prospective clients, listing member companies offering their services in Haiti. Among them is Triple Canopy, a large private security firm that has operated under multi-million dollar contracts in Iraq. Others are already in Haiti, like HART Security which is currently "providing security services to the media."

This would not be the first time private security firms have sought to profit from a natural disaster. As The Nation reported in 2005, guards from Blackwater, now called Xe, arrived in New Orleans in the immediate aftermath of Hurricane Katrina and were soon joined by employees of DynCorp, Intercon, American Security Group, Blackhawk, Wackenhut and an Israeli company called Instinctive Shooting International. "Within two weeks of the hurricane, the number of private security companies registered in Louisiana jumped from 185 to 235," the magazine reported.