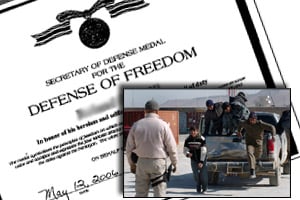 Falls Church, Va. -- A former sheriff's deputy from South Dakota named Tate Mallory got a medal for service to his country on Wednesday, but it didn't get much attention.

There was no top military brass at the ceremony, no long line of politicians waiting to shake his hand. Instead, Mallory stood on a dais in an anonymous hotel room in suburban Washington, D.C., looking pleased and slightly embarrassed as he was handed a Defense of Freedom medal.

"I thought that if someone was going to get hurt, it was going to happen to somebody else," he told the audience, which included friends, family, co-workers, State Department officials and representatives from a congressional office or two.

Mallory was a civilian contractor who worked for DynCorp, a large defense firm that helps train police in Iraq and Afghanistan. He was hit by a rocket-propelled grenade in western Iraq in 2006, punching a hole in his gut. He almost bled to death until U.S. Marines saved him.

He is one of thousands of civilians whose deaths and injuries are not included in the Pentagon's official list (PDF) of casualties from the wars in Iraq and Afghanistan. A joint investigation by ProPublica, ABC News and the Los Angeles Times found that injured civilian contractors routinely face drawn-out battles to get medical treatment paid for under a taxpayer-financed federal system known as the Defense Base Act.

The Labor Department, which tracks injuries to contract workers abroad, recently updated the tally: Since 2001, more than 1,700 civilian contractors have died in Iraq and Afghanistan and nearly 40,000 have been reported injured.

More than a hundred contract workers have been given the Defense of Freedom medal (PDF), a Pentagon citation that is the civilian equivalent of the military's Purple Heart. Still, it's difficult to track who receives the medal, which was created by the Defense Department after 9/11. Typically, corporations such as DynCorp or Houston-based KBR nominate their workers, with the Pentagon approving the final award. But there is no centralized record of recipients, nor are the award ceremonies (PDF) usually publicized.

Several of those at Wednesday's ceremony, which was sponsored by DynCorp, lamented the lack of attention. They noted that contractors in Iraq and Afghanistan usually get in the news for bad behavior -- such as wasting taxpayer money or the killing of innocent civilians.

Ken Leonard, a former DynCorp employee who was also recognized for valor on Wednesday, said Americans are not always aware of the contribution made by civilian contractors at work in the war zones. Leonard had both legs amputated after being injured by a roadside bomb in 2005. After 18 months of surgeries and rehabilitation, he returned to work as a police officer in High Point, N.C.

"I'd say there was a public misunderstanding. I was there to work with the military," Leonard said. "There's a perception that we're all gun-crazy, trigger-happy cowboys. That's not the case."