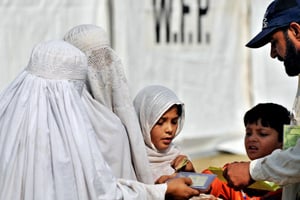 The U.S. government will reduce the amount of money it spends on American contractors and nongovernmental organizations working in Pakistan this year, even as Washington begins to spend the first tranche of a new $7.5 billion aid package in that country, according to a report from the State Department. Instead, more of the money will go to Pakistani NGOs and contractors, a move that has raised concerns among U.S. development workers.

The document, the "Pakistan Assistance Strategy Report," was sent to Congress last week and outlines how the State Department plans to spend and oversee the aid package. It calls for spending $3.5 billion on what it calls high-impact, high-visibility infrastructure programs, particularly in energy and agriculture; $2 billion on humanitarian and social services; and $2 billion on governance, security and legal institutions. The report also said the United States will rely more on Pakistani public accounting firms to monitor that money.

"U.S. assistance will be directed increasingly through a broad range of Government of Pakistan institutions, as well as local nongovernmental organizations (including the private sector) with the capacity to implement programs effectively and accountably," reads the report, which adds that the approach is intended to increase Pakistani ownership over the aid. "The absolute level of funding through U.S.-based implementing partners is expected to decline slowly in FY 2009-FY2010."

That strategy, which had been hinted at for months by Richard Holbrooke, the Obama administration's senior diplomat in the region, has generated pushback from the development community, as well as from within the U.S. Agency for International Development. In October, USA Today obtained a copy of a memo (PDF) from a USAID economist warning that directing more money to Pakistani organizations and government ministries would increase the risk of corruption, and could compromise the goals of USAID programs. Those concerns were supported by a report (PDF) in October from the agency's internal watchdog, the Office of the Inspector General, which cited "the risks associated with high reliance on indigenous organizations and management."

Last week's report also outlines how the government hopes to prevent the money from being lost to fraud and corruption, especially in light of what the report calls "Pakistan’s limited capacity to absorb and effectively use external resources," and the country's "public sector corruption." The measures include "significantly" increasing the number of U.S. government staff in Pakistan, particularly those working for USAID. The report doesn't indicate how many new staff USAID will add to its operations in Pakistan, or how long it will take the agency to hire, train and deploy those staff.

The State Department also plans to expand its use of Pakistani public accounting firms, which will be used to audit money spent on Pakistani NGOs. The Inspector General's office will train and oversee those accounting firms, and approve their audits, according to the report. The office's Pakistan team is currently based in the Philippines; an official at the agency said the team will move to Pakistan, where it will have nine staff members.

Pakistan's accounting sector has been criticized for failing to comply with international standards. A 2007 report (PDF) by the World Bank found that the education and training of accountants in Pakistan fell short of international standards, and that the auditors who work for the Supreme Audit Institution, Pakistan's highest audit authority, needed "more professional training."

A former manager with an international development nonprofit, who has experience working with Pakistani accounting firms on aid projects in Afghanistan, told ProPublica that the oversight of Pakistani firms was less robust than oversight of their international counterparts. The former manager said his project had been audited multiple times by Pakistani accounting firms, and that each audit ended with a positive report. But when the project was audited by accountants from within his own organization, "we had no end of difficulties."

With the Pakistani accounting firms, "it was incredibly easy to get the audit results that we needed," said the former manager, who wouldn't be named because he still works in the development field. "They want to keep getting business with certain companies. If you continue to give people clean audits, people will continue to select you as their audit vendor."

Stephen P. Cohen, a South Asia expert at the Brookings Institution and a former member of the Policy Planning Staff at the State Department, praised the new report, but questioned the ability of Pakistani NGOs to handle the increase in American funding, as well as USAID's ability to monitor those projects.

"We should have been addressing Pakistan's problems more effectively earlier," Cohen said. "This is a good report. They say all the right things. The question is, is it too much, too late?"

Are you involved in the development field in Pakistan or Afghanistan? ProPublica is tracking aid efforts in both countries, and we'd like to hear from you. Please contact us at [email protected] or (917) 512-0212.