Two senior Democratic senators got special "V.I.P." loans from the mortgage lender Countrywide Financial. Both say they had no idea they'd received rate and fee reductions. But a D.C. watchdog has filed an ethics complaint asking whether the senators should have noticed their V.I.P. treatment. Citizens for Ethics and Responsibility in Washington also asks that the Senate ethics committee establish a vetting process for lawmaker loans.

Senate rules prohibit gifts of more than $100 over the course of a year from a private entity, but Jan Baran, a Republican ethics attorney, said it was important lawmakers not be penalized "when they have unwittingly accepted something. Not knowing that something is a gift is relevant." Baran also said that the exclusivity of the loan terms was also relevant. Even if such terms were not available to the general public, he said, they might not be considered gifts if provided to "many other people" -- he drew an analogy to lawmakers receiving invitations to the Oscars, which is attended by thousands of other people. "We need more information about these types of loans." 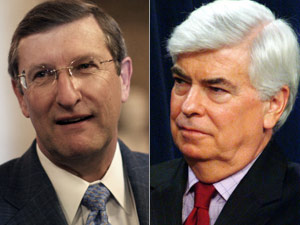 Conrad has said that former Fannie Mae CEO Jim Johnson gave him Mozilo's number in 2004 when he was seeking a lender for a $1.07 million mortgage on his Delaware vacaction home. He spoke with Mozilo, he said, but never asked for or expected a discount. Internal Countrywide emails obtained by Portfolio show that Mozilo instructed his subordinate to lop off $10,700 in fees. Conrad announced over the weekend that he is donating $10,500 to Habitat for Humanity.

That same year, Conrad also got special treatment when he sought a mortgage to buy an eight-unit apartment building. Countrywide had a policy against providing loans for buildings with more than four units, but Mozilo made an exception, according to another internal email, "due to the fact that the borrower is a senator." Conrad says he was told the company "frequently made exceptions, especially for good customers." He now says he'll renogiate the loan because of the apparent special treatment.

It is less clear how Sen. Dodd became a Friend of Angelo. A spokesman told the Washington Post that neither Dodd nor his wife spoke to Mozilo about their loans. But Portfolio reported that Dodd received rate reductions on two different properties cumulatively amounting to savings of more than $70,000 over the life of the loans. In a short statement on Friday, Dodd said he and his wife "did not seek or expect favorable treatment" and that they'd "shopped around and received competitive rates."

CREW's letter to the ethics committee asks that the panel not only probe the loans to Conrad and Dodd, but also find out whether other lawmakers received similar deals. "The public needs to have confidence that members of Congress are not taking advantage of their elected positions to get better deals on their mortgages," said CREW's executive director Melanie Sloan. The group also called for a "vetting process" for loans.