The $3 pill known as BiDil was already a difficult sell when a Georgia-based pharmaceutical company bought the marketing rights a few years ago. A treatment for African Americans suffering from heart failure, BiDil had never really caught on, forcing the drug company that developed it to take a buyout offer. One strike against the drug was a 2009 study that raised questions about its safety and effectiveness.

So last summer, the new owner of the drug, Arbor Pharmaceuticals LLC of Atlanta, sought to get the study taken down from a government website. For help, the company turned to the office of a congressman to whom the CEO had given the maximum $2,700 campaign donation — Rep. Tom Price, the Georgia Republican nominated by Donald Trump to become head of the Department of Health and Human Services.

Over the next few months, one of Price’s aides emailed the federal Agency for Healthcare Research and Quality at least half a dozen times, asking at one point “what seems to be the hold up” in getting the study removed from the website, which aims to help patients, health care providers and policy makers make “better treatment choices.” In the end, the agency, which is part of the Department of Health and Human Services, kept the study online but added a note: “This report is greater than 5 years old. Findings may be used for research purposes but should not be considered current.”

The exchange over the BiDil study, obtained through public records requests and not previously reported, is the latest example of how public policy and industry matters converged in the congressional career of Price, who is a physician. Price was questioned extensively yesterday during his confirmation hearings about reports that he took legislative action affecting companies that donated to him or in which he held shares.

Neither Price’s office nor officials at Health and Human Services responded to requests for comment. Edward Schutter, chief executive of Arbor Pharmaceuticals, told ProPublica he was not aware his company had requested anything from Price. He said he never discussed the issue with the congressman.

NitroMed, the original maker of BiDil, a combination of two generic drugs already on the market, was initially turned down for approval in 1997 by the Food and Drug Administration, which concluded that a study showing it was associated with a reduced chance of death was not statistically significant. But the drug was vetted again and approved in 2005, after a clinical study of 1,050 black patients published in the New England Journal of Medicine found patients who took it had a 43 percent better chance of survival.

The drug made waves as one of the first treatments targeting a particular racial group. Its supporters hoped it would be a pioneer in pharmaceuticals catering to particular genetic makeups, but skeptics panned the notion that race was an effective biological predictor. In any case, the drug flopped amid little interest from patients or doctors. NitroMed failed in 2009, and Arbor Pharmaceuticals bought the rights. 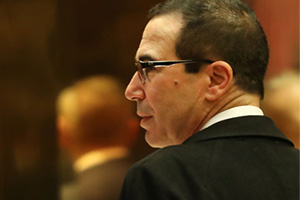 When Steven Mnuchin ran OneWest, the bank aggressively and in some cases, wrongly, foreclosed on elderly homeowners with reverse mortgages. The bank had a disproportionate share of such foreclosures. Read the story.

The study led by Karl Hammermeister, a cardiology professor at the University of Colorado School of Medicine, and originally published in the journal Clinical Therapeutics in 2009, found that BiDil was not actually associated with a significant reduction in death or 2009 hospitalization. The study found that in all but one of its test groups the drug was associated with significantly increased risk of hospitalization for heart failure.

Arbor, a privately held firm that employs about 600 people, is headquartered in Price’s district. In August of 2015, Schutter donated $2,700 to Price’s campaign. In February 2016, a woman named Linda Schutter, who lives at the same address as the CEO, also gave $2,700, federal records show.

Gary Beck, a policy assistant to the congressman, first reached out to the federal research agency about the study in July, emails show. “I have been in contact with representatives from Arbor Pharmaceuticals based in Georgia in regard to some issues they have with the study that is linked below,” he wrote, adding that the company told him “the study might be outdated” and they wanted it removed from the website.

“I wanted to get in touch with you to get a better grasp on the situation and what seems to be the hold up,” Price’s aide wrote.

Francis Chesley, an official at the agency, responded to Beck, saying he would check into the matter. Three days later, Beck followed up again. Chesley told him the agency was examining its website archiving policy to ensure the public had access to up-to-date information, and offered to talk to the pharmaceutical company directly.

Beck then pressed him: “Is it in the opinion of the Center for Evidence and Practice Improvement,” he wrote, referring to the division doing the review, “that the BiDil study could be determined as out-of-date once the examination is completed?”

Beck sent four more emails over the next four months. In November, seemingly exasperated by the fact that the study was still online, he asked: “Would someone else at AHRQ be able to provide me with an update to this situation?”

Jonathan Kahn, a professor at the Mitchell Hamline School of Law in Minnesota who wrote a 2013 book about BiDil’s fraught history, has been a critic of marketing BiDil as a race-specific drug, arguing it was pitched as such for legal and commercial reasons, not to improve patient outcomes. He said he hasn’t independently assessed the 2009 study posted by the federal agency, but added in an email, “there is NO WAY this study is outdated. It is much more recent than the studies underlying the approval of BiDil itself.”

Price, who will oversee what could be a massive overhaul of the nation’s health care system if he is confirmed, faced harsh questions from Democratic lawmakers yesterday about allegations in recent months that he used his office to help donors and companies he invested in. Last month, The Wall Street Journal reported that Price had traded more than $300,000 in shares in health-related companies as he played a role in legislation that could have affected their share prices.

Last week, Kaiser Health News reported that Price was given a “sweetheart” deal to invest in an Australian biotech company — a stake that has since showed a 400 percent gain. That company could benefit from the 21st Century Cures legislation Price supported. And this week, CNN reported that Price invested in Zimmer Biomet before introducing a bill that could have helped the medical device manufacturer. The company’s political action committee then donated $1,000 to Price’s campaign.

The Trump camp has since said the Zimmer Biomet purchase was made by Price’s broker, and that Price did not know about the transaction at the time he introduced the legislation that could have given the company a boost. Price has maintained that he abided by the law and took no legislative action for personal profit.

Senate Minority Leader Chuck Schumer called for an ethics investigation into Price’s conduct, and has cast doubt on Price’s defense. “Now they say there’s a broker,” Schumer told CNN this week. “It’s kind of strange that this broker would pick this stock totally independently of him introducing legislation that's so narrow and specific to this company.”

Price’s actions have come under scrutiny in the past. In 2010, the Office of Congressional Ethics, an official government watchdog, found that there was “substantial reason” to believe that Price solicited or accepted donations at a fundraiser in a manner that could have created the appearance that “special treatment or access was provided to donors or that contributions were linked to an official act.”

The day before the 2009 financial reform bill was voted on by the House, Price held a fundraiser he called the “Financial Services Industry Luncheon” that appeared to target lobbyists on the legislation. Price’s fundraiser offered those groups private meetings with the congressman. The House committee that receives referrals from the watchdog group decided not to pursue the concerns.

Update Jan. 19, 2017: Alison Hunt, a spokeswoman at the Agency for Healthcare Research and Quality, said in a statement that the agency did not remove the study. The note, she said, was added because the agency has a general policy to flag studies older than five years.