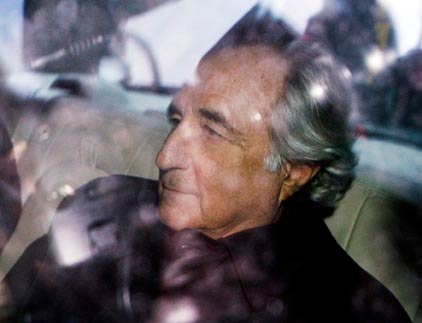 Earlier this week, federal prosecutors filed a brief (PDF) arguing that Bernard Madoff should be thrown in jail and have his $10 million bail revoked. The move came after the disgraced financier allegedly mailed a million dollars in jewelry to friends and family, in violation of the terms of his bail. He has been under 24-hour house arrest, in his $7 million Manhattan apartment, since the middle of December.

How did the man accused of the biggest Ponzi scheme in history, with untold access to money and influence, get house arrest in the first place? Why not the slammer?

To find out, we called Anthony Barkow, executive director of the Center on the Administration of Criminal Law at the New York University School of Law. Barkow is a former federal prosecutor who handled white-collar cases.

He explained that judges are bound by the Bail Reform Act, a federal law that governs pretrial detention, and can consider two factors when deciding whether to detain a defendant: Is the accused a danger to the community? And does he or she pose a flight risk?

In most cases, the burden is on the government to prove a person should be detained — defendants are innocent until proven guilty — and the judge is supposed to set the least restrictive terms that guarantee the defendant will come back to court. Sometimes that can mean house arrest.

"There was a public outcry for Madoff’s detention," Barkow said, "but a lot of that was rooted in a misunderstanding of the law."

"The most stringent condition is detention," he said. "Once someone is released, one of the more stringent conditions that can be imposed is 24-hour house arrest. The judge was indicating that although he did not believe Madoff needed to be held in jail in order to secure his appearance, he did need a relatively stringent detention condition."

That was an unusual move, according to data from the Bureau of Justice Statistics, a division of the U.S. Department of Justice. In 2004, the most recent year for which complete data (PDF) are available, 70 percent of federal defendants accused in fraud cases were released after an initial court hearing. Of those, less than 2 percent were released under conditional terms such as house arrest.

Still, defendants in white-collar cases are more likely to be released. In 2004, only 27 percent of people accused of violent crimes won pretrial release; 29 percent of alleged drug offenders were released. Under the law, narcotics cases are treated differently: The burden is on the defense to prove that a person should not be detained, rather than the other way around.

"There is definitely a difference that one could say is inequitable," Barkow said.

"White-collar criminals have access to more things—houses, friends. They in fact have more ability to flee," he said. "The deck is stacked against the street criminal, in some cases in fair ways, and in other cases in the way that society favors the rich."

Madoff, of course, is no longer in the government’s favor, and may soon find himself behind bars.

In their latest brief, prosecutors note that Madoff violated a condition of his release that prohibited transferring assets – i.e., the jewelry. "The fact that the defendant would do so, with the eyes of the world, prosecutors, and other regulatory authorities upon him, speaks volumes,’’ the brief says.

The defense argues in its court filing that the court could take measures other than jail time to address the government’s concerns, such as putting all of Madoff’s jewelry in escrow, having guards search outgoing mail and appointing a receiver over his assets and property.

We’re still waiting to hear when the judge will rule.