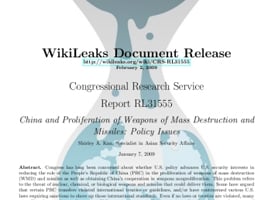 In making many of its decisions, Congress relies on hundreds of analysts to study issues from stimulus spending to alternative fuel vehicles to human cloning.

But the department that does those analyses, the Congressional Research Service, does not make the hundreds reports it generates each year available to the public. (But the public does pay: The CRS's annual budget is about $100 million.)

Many of those reports have just been made available to the public via the pro-transparency site WikiLeaks, which has posted 6,780 CRS reports. The folks at WikiLeaks won't say how they got the reports: "As for getting, everyone wants to know which member of Congress or their staff is our source. Naturally we can't talk about that," a WikiLeaks staffer told us in an e-mail.

WikiLeaks says its collection does not include older reports that are available only on paper.

CRS can't offer up the reports because they are required by statute to make its reports available only to members of Congress. According to an April 2007 memo (PDF) from CRS director Daniel Mulhollan, CRS lacks the "authority to make its products available to anyone other than the Congress of the United States."

"Needless to say, I don't find the arguments persuasive," said Stephen Aftergood of the Federation of American Scientists. "The CRS' sister congressional organization, the Government Accountability Office, publishes new reports online each day without any detrimental effect. But the decision to publish is for Congress to make, not CRS."

Aftergood's organization, FAS, has its own archive of CRS reports dealing with national security, intelligence and foreign relations.

Others have published the reports too: The University of North Texas Libraries has an extensive CRS collection as does the Thurgood Marshall Law Library at the University of Maryland School of Law. And OpenCRS, a project of the Center for Democracy and Technology, has a directory to CRS collections around the country. One of the few natural outlets that doesn't offer CRS reports: the U.S. government.