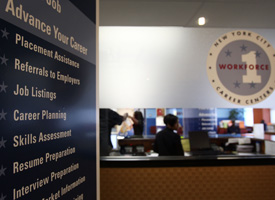 While the bailout bill has been stuffed to the gills with tax breaks, one group not included in the list is nearly 800,000 laid-off U.S. workers. That's how many stand to run out of unemployment aid on Sunday if Congress fails to pass an emergency extension of jobless benefits this week.

A spokesman for Senate Majority Leader Harry Reid (D-NV), Jim Manley, told ProPublica yesterday that Senate Republicans had "balked" at an attempt to attach an unemployment-benefits extension to the Wall Street rescue.

A Democratic Senate aide told ProPublica this morning that senators are hoping to reach an agreement this afternoon. Unless that happens, jobless workers may just have to hope that Congress returns for a lame-duck session after Election Day.

The jobs situation looked bleak before the recent financial meltdown, and some expect that it will get worse. The national unemployment rate reached a five-year high (PDF) of 6.1 percent -- 9.4 million people -- in August. The federal Labor Department said the U.S. economy has shed 605,000 jobs this year. Some 3.5 million people currently draw jobless benefits. Business watchers have warned that job cuts will deepen as companies seek to offset higher borrowing costs in this credit crunch or simply downsize.

The House approved a jobless benefits extension last Friday, as part of a broader economic stimulus package opposed by the White House and ultimately sunk by Senate Republicans. (Attached proposals included new spending for food stamps, Medicaid and construction, and -- controversially -- a continued ban on offshore oil drilling.) Stand-alone bills to extend unemployment relief have been introduced in both houses, and it is expected that the House would renew its approval.

The estimate that nearly 800,000 workers will max out all unemployment aid on Oct. 5 comes from an analysis of federal labor data (PDF) by the pro-worker National Employment Law Project. The figure was cited by House leaders during successful consideration of a benefits extension. Asked about its accuracy, Labor Department rep Gary Steinberg said, "We can't tell you how many people might exhaust their benefits. Even if we had [the number], we wouldn't project it [publicly]."

Rules for unemployment insurance vary by state. But generally applicants must show that they had a job they lost through no fault of their own, and once approved, they have to submit frequent proof that they're looking for work. Payments are pegged to prior income, up to a weekly cap of $250 to $370 depending on the state. State aid lasts for 26 weeks.

States are facing shrinking revenues and social-service cuts, as the Philadelphia Inquirer noted this week in a plea to the federal government to “bail out the neediest, too.” (Some of the states hardest hit by unemployment (PDF) -- such as Florida, Ohio, Michigan, and Nevada -- have also suffered some of the highest reported foreclosure rates and happen to be key electoral battleground states.)

On June 30 President Bush signed a 13-week extension for workers who would hit the 26-week state limit before next March. The pending House and Senate extension proposals would add another seven weeks of relief for all states. So-called "high unemployment" states, where joblessness exceeds six percent, would receive another 13 weeks' aid. The Congressional Budget Office has estimated the proposed extensions would cost about $6 billion.

A spokesperson for the president's Office of Management and Budget, Abigail Tanner, said yesterday that the Bush administration had not yet taken a position on the pending extension proposals. But she said its general stance is that "unemployment benefits should be temporary in nature to encourage a return to work as quickly as possible."

Opponents of extended unemployment insurance say it keeps people from looking for work. But supporters say current government data show a shortage not of will but of jobs. Most of the recent hike in unemployment is due to people having just lost their jobs, not perpetual unemployment, according to the Economic Policy Institute. In early September MarketWatch reported that economists viewed a spike in first-time unemployment claims as a sign of a tightening labor market.

Asked whether Republicans might relax their opposition to extending unemployment relief before the election recess, McConnell spokesman Stewart said there might not be time. "There is no next couple of days," he said.