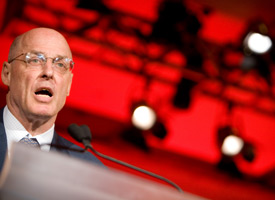 Treasury Department Secretary Hank Paulson is always careful to describe his department's activities as investments rather than spending. Of the billions going to the nation's banks, Paulson said in October, "This is an investment, not an expenditure, and there is no reason to expect this program will cost taxpayers anything." This is presumably to counter the prevailing use of "bailout" to describe the TARP -- even when "bailout" is indisputably the right term. A press release described Treasury's $40 billion purchase of AIG senior preferred stock in November (part of a $150 billion package) as an investment.

Today the AP looks critically at that investment, specifically at how much the U.S. government would reap today if it exercised all the stock warrants it's received in exchange for its billions. It's not much of a haul. The Treasury has so far invested about $180 billion in 53 banks. The AP found that the stock for all but two of those institutions has gone down since the government's investment.

The stocks haven't gone down just a little, either. They've dipped about a third below the strike price for the warrants, as vividly illustrated by Citigroup. The Treasury has so far invested $45 billion in Citigroup preferred stock, first a $25 billion investment in mid-October and $20 billion more in late November:

Citigroup stock has since fallen below $8.

The Treasury's response is perfectly reasonable: The government got the stock warrants to help ensure that the government could recoup its money or perhaps even make a profit much farther down the line:

"We're not exercising the warrants today," Treasury spokeswoman Brookly McLaughlin said. "We have 10 years to exercise the warrants, so it's more accurate to look at what the market believes are the 10-year prospects for these banks."

Moreover, exercising warrants isn't the only way the Treasury could recoup its "investments." In return for its billions, the Treasury has received preferred shares that pay five percent annually for the first five years and nine percent thereafter. "The Treasury Department projects that the $180 billion in preferred stock will generate roughly $9 billion per year during the first five years and $16.2 billion per year afterward, assuming the banks remain solvent," the AP reports.

If the banks remain solvent and eventually return the principal to the Treasury, then the government could make a pretty penny on that alone. Add another assumption -- that the market's opinion of these banks brightens over time -- and the picture gets even better. Whether that actually happens is anybody's guess.