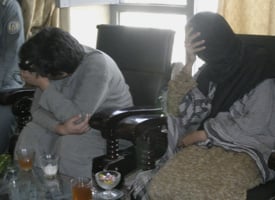 The strange case of Aafia Siddiqui continues. As we wrote last week, there are lingering questions about where Siddiqui was in the five years before the suspected al-Qaida sympathizer was apparently arrested last month in Afghanistan. Siddiqui disappeared along with her three children in March 2003. The U.S., who has charged Siddiqui with trying to kill a GI during an escape attempt after her arrest this July, says the American-trained neuroscientist spent those years as a fugitive. Meanwhile, human rights activists wonder whether Siddiqui was detained in a secret prison.

Now thereâs a new wrinkle in the case. It's one that's nearly as odd as Siddiqui's lost time, except this time everybody seems to agree on the facts: Afghan security forces are holding Siddiqui's son, an 11 year-old U.S. citizen. The Washington Postreports:

In a letter to [Siddiqui's family]..., federal prosecutors said photos and DNA tests strongly suggest that the youngster in Afghan custody is Siddiqui's son, Ahmed. The boy was detained July 18 when Afghan police arrested Siddiqui in what they described as a shootout near a government compound in Ghazni.

The Post called officials in Afghanistan who confirmed that they're holding the boy. "We kept the boy for 24 hours because we do not have a right to hold him longer than that," an Interior Ministry official told the paper. "We sent him to the National Security Directorate, and I don't know what happened to the boy after that."

According to the Post, "U.S. agents" also spoke with Siddiqui's son, who "initially told them he was an orphan."

The Post doesn't quote any U.S. officials on their reaction to Afghan forces holding an 11-year-old American citizen. We're going to make some calls.

Meanwhile, the CIA again denied that they knew anything about where Siddiqui was in the years before her capture. "Had we known where Ms. Siddiqui was prior to her capture, we would have shared that information with our partners in this country and overseas," a CIA spokesman told the Post. "She was a fugitive from American justice."