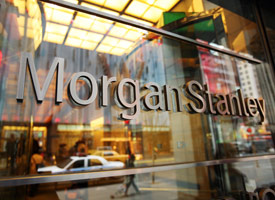 After clients of Credit Suisse brokers Eric Butler and Julian Tzolov complained that the two brokers had lied to them about where their money was invested, the two resigned from the firm. But for the next 10 months, the pair found work at a rival Wall Street bank: Morgan Stanley. They were fired shortly before the Wall Street Journalreported in July that federal prosecutors were on the case. They were ultimately indicted last week.

"We were not aware of the client complaints," a spokeswoman for Morgan Stanley told us. "We have no reason to believe that either individual engaged in similar alleged conduct while they were at Morgan Stanley."

Asked when the firm had learned of the complaints, the spokeswoman declined further comment, only offering the clarification that the firm wasn't aware of the complaints "at the time they were hired." The Wall Street Journal had first reported on the complaints in October of last year -- nine months before the brokers were fired.

Butler and Tzolov resigned from Credit Suisse on Sept. 7, 2007, amid client complaints that the brokers had told them their money was in student loan-backed securities, when it was really in mortgage-backed securities (see our complete rundown of the case yesterday). On top of the client complaints, the two had dealt in auction-rate securities, and in August of 2007, auctions for a number of subprime mortgage-backed securities had failed (part of a broader failure of that market), making it impossible for their clients to liquidate hundreds of millions of dollars in investments.

Morgan Stanley snatched up the pair three days later to work as financial advisers for its global wealth management group. Less than a month later, in a broader story about the collapse of the auction-rate securities market, the Journal reported that Credit Suisse had divulged the client complaints in a regulatory filing. The story named Butler and Tzolov and quoted a lawyer retained by the two brokers as saying, "They don't think they were doing anything wrong."

That fall, the brokers settled two of the client complaints: one for $7 million and another for $3.6 million, the Journal later reported.

But the problem didn't go away. The complaints stoked an SEC and Justice Department investigation, which was first reported on July 9 of this year. Morgan Stanley fired the pair on July 7, two days before the story appeared.