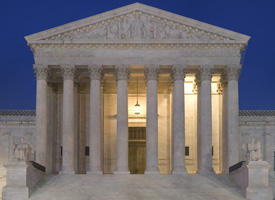 The next president likely will fill one or more Supreme Court vacancies. That Roe v. Wade "hangs in the balance," as Sen. Barack Obama put it in this week's debate and Sen. John McCain did not dispute, is well known. But the high court also has enormous power to shape the conduct of business in America.

Obama brought up a banner case from the court's 2006-07 term that pitted an employee against a major corporation, Goodyear Tire. Lilly Ledbetter was well into a 20-year career as the lone female plant supervisor among 16 when she discovered she'd been paid less than her male counterparts -- including those with less seniority. A 5-4 majority of the justices, led by Bush appointee Justice Samuel Alito, erased an Alabama jury's verdict that the company had illegally discriminated against Ledbetter. The question wasn't whether Goodyear had paid her less than the men. No one denied that. Rather the issue centered on whether a company should have to answer for a salary difference so long after having set it.

The court ruled that employees have 180 days from being told the amount of their pay to take action about any inequality. Justice Ruth Bader Ginsburg, a Clinton appointee, wrote for the dissenting four that the time bar ignored the reality of the workplace, where workers can't easily learn how their pay stacks up against their colleagues' -- perhaps especially when the worker is a lone woman in the company of men.

The decision was one of numerous business-side victories in that term. Corporations won in 13 out of 16 cases where the U.S. Chamber of Commerce had filed briefs. The Chamber's lead Supreme Court litigator told the Legal Times' Tony Mauro, "We've been representing the business community before the Supreme Court for 30 years, and this is our strongest showing since."

Mauro, who had been covering the high court for some 20 years, wrote that after Bush named Alito and Chief Justice John Roberts to the court, it had become "very pro-business...more so than any Supreme Court in decades."

Among the big winners that term and since have been corporations facing securities and antitrust actions as well as those seeking to avoid stricter state consumer-protection rules in areas -- such as national banking and medical-device manufacturing -- where federal regulations already applied. In a major securities law ruling in January, the court blocked investor class actions against so-called third parties who partner with corporate fraudsters but do not directly do the lying themselves. Such third parties can include accounting firms and banks.

In its current term, the Supreme Court will consider an issue that NPR's Nina Totenberg said "has long topped the business community's wish list" -- immunity for drug companies from consumer lawsuits brought under state laws more protective than federal rules. Adam Liptak of the New York Times described the plaintiff in the case, a 62-year-old musician whose lower right arm was amputated after a bad drug reaction, as animating anecdotes of her stints as an electric bassist in rock bands by "strumming an imaginary guitar with a phantom hand."

Nomination by a Democrat or Republican is no guarantee that a justice will rule pro-plaintiff or pro-business in any given case.

Sometimes obscure or complicated legal reasons, unrelated to the seeming ideological positions in a case, sway a justice. And most federal judges, who don't face popular election but receive lifetime appointments, probably would protest that politics are a crude, even useless tool for predicting their decisions.

A year after deciding against Lilly Ledbetter, for instance, Justice Alito wrote for the majority in favor of a different employment-discrimination plaintiff. In still another discrimination case, the court unanimously sided with the worker. As Jeffrey Toobin describes in his book, The Nine, much political sweat can be poured into vetting court nominations only to have appointees end up surprising their backers. For the Roberts court, however, pro-worker decisions have so far been exceptions in a pro-business record.