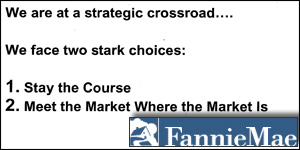 The taxpayers are on the hook for potentially hundreds of billions of dollars in mortgage losses from Fannie Mae and Freddie Mac because four years ago the companies decided to jump into the subprime market with both feet. And documents uncovered by Congress show the companies' execs were warned that they were running unknown risks.

The starkest demonstration of that comes from an internal Fannie Mae PowerPoint presentation (PDF) from June 2005. "We are at a strategic crossroad..." one slide says, "stay the course" or "meet the market where the market is." According to the presentation's following pages, staying the course would be safer but mean "lower earnings," and Fannie might become a "niche player." Meeting the market would lead to "higher volume/revenues" and "increased exposure to unknown risks." The presentation ultimately recommended staying the course while moving toward subprime as an "underground" effort.

But Fannie went underground in a big way. Its exposure to nonprime loans may exceed $500 billion.

The House oversight committee has also uncovered warnings from the companies' risk officers about so-called "liars' loans," which required no proof of income. One officer wrote Freddie's CEO to say that the company was buying loans from lenders who were targeting "borrowers who would have trouble qualifying for a mortgage if their financial position were adequately disclosed." He was ultimately fired.

And over at Fannie, things were no better. In 2007, the chief risk officer wrote CEO Daniel Mudd to complain that Mudd had told the board of directors Fannie could support "taking more credit risk." The risk officer wrote: "I have been saying that we are not even close to having proper control processes for credit, market, and operational risk. I get a 16 percent budget cut. Do I look so stupid?"

The hearing is going on right now. Three former Fannie CEOs will be testifying (Mudd among them), along with former Freddie CEO Richard Syron. You can watch it online or on C-Span.