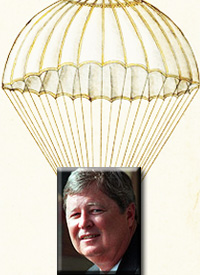 Yesterday we reported that a Wisconsin bank had managed to pay its departing president and chief operating officer $1.65 million despite Congress' ban against golden parachutes for companies that accepted TARP money.

Well, here's another bank that has found a way around the ban. Hampton Roads Bankshares of Virginia, which received $80.3 million of TARP money last year, announced last week that its CEO was retiring. On Friday, the bank disclosed that in addition to a full slate of retirement benefits, the exec will be paid $1.3 million for "consulting duties."

Jack Gibson, the departing CEO, evidently doesn't think he'll be working too hard consulting. "I can think of no better time to fulfill my personal goal of early retirement," he said in a press release announcing his exit. "It is well known within the company that I would like to retire by age 60, and I'm almost there." During the period of his three-year consulting gig, the bank has also agreed to cover his membership dues at a local country club.

The $1.3 million that Gibson will receive roughly matches the total amount he received in salary over the last three years as CEO ($1.4 million).

"That is a very substantial amount of money for consultancy for a bank of this size," said Paul Hodgson of the Corporate Library, a corporate-governance research firm. "I've seen S&P 500 telecoms pay less than this for consultancy work. This is supposed to be a retirement."

In addition to the cash payments and club membership, Gibson will get some other perks: title to the company car that he uses, "any necessary incidentals" over the next three years, and health insurance for 18 months. The agreement also gives Gibson the option to require the bank to buy 100,000 of his shares in the company. (The stock closed yesterday at $8.19 a share.)

Like Wisconsin's Associated Banc-Corp, Hampton Roads is prepared for the possibility that regulators will determine that the arrangement violates the ban on golden parachutes. According to the separation agreement, if the Treasury Department or the Federal Reserve determines that any payment breaks the law -- or if they even "criticize" the arrangement -- the bank can choose not to pay any more and ask Gibson to return what he has received. But that would only be a short-term reversal. The agreement says that if the restrictions were lifted (either through change of legislation or the bank's repaying its TARP money), Hampton Roads would pay everything that had been withheld -- with 8 percent interest.

Hampton Roads did not respond to our requests for comment, and we couldn't track down Gibson.