Update: Our bailout list of banks – and now, insurance and car companies – has grown into the hundreds. Check out our Eye on the Bailout, our comprehensive site tracking the bailout 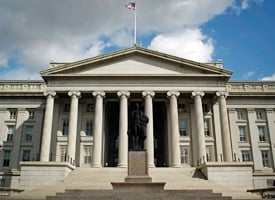 Based on news reports and press releases, we’ve cobbled together a partial list, totaling 26 banks at an overall investment of approximately $160 billion. According to reports, the Treasury Department has approved at least 28 banks – meaning that there are two that, as far as we can tell, haven’t been made public. If you know who we’re missing, please drop us a line. Here’s our list:

In the last several days, the Treasury has reportedly approved some 20 regional banks to participate, added to the eight national banks that joined two weeks ago, that should make 28.

A refresher: Under the terms of the program, the Treasury’s money is technically invested as preferred stock, though it’s essentially a loan, returning 5% per year (after five years, the rate rises to 9%). The government is also given common stock warrants worth 15% of the investment.

In their press releases touting the investment, the banks have tried to play it cool, insisting that while they're happy to have the cash, of course they don't need it.

Most stress that they have no real need of the money, but couldn’t resist the attractive terms. A number boast that they are among the most strongly capitalized banks in the country, These banks tend to say that they’ll use the money to increase lending, protect against bad times, and buy up weaker banks.

Others trumpet the Treasury’s investment as a blessing that they are a “healthy” bank. (UCBH’s CEO: "This is an enormous statement of confidence and demonstrates that we are a healthy financial organization that can help support the U.S. financial markets in this time of economic turmoil.")

And then there’s what you might call the patriotic reaction. A handful of banks proclaimed themselves honored to do their part for the U.S. economy.