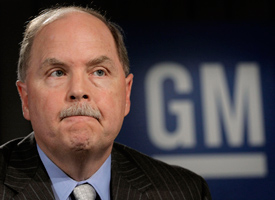 This morning, General Motors is rolling out its third new business plan since December. The plan, in brief: cut 21,000 jobs, a third of its workforce, close a number of its plants, drop the Pontiac brand and try to persuade 90 percent of its bondholders to swap their notes for equity in the company.

The U.S. Treasury will extend $11.6 billion more to GM, in addition to $15.4 billion in existing loans. The government will forgive half the debt in exchange for equity in a restructured GM.

Should all that come to pass and GM lands more than $27 billion in aid, that would make the company the fifth largest beneficiary of taxpayer money in the bailout so far, behind AIG, Bank of America, Citigroup and Freddie Mac.

In other auto news, Chrysler says it has struck a deal with the UAW. That's progress, but the company still has to reach a deal with its big bank lenders by Friday, the deadline set by the administration for a restructuring deal.