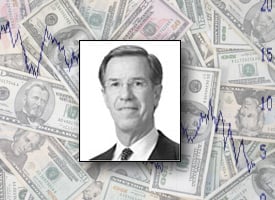 The South Financial Group, South Carolina's largest bank, announced earlier this week that it had been approved to receive $347 million from the U.S. government. But the bank's founder and longtime CEO Mack Whittle won't be sticking around. He retired with an $18 million severance package in late October, two months earlier than had been expected. Because of the timing, he's free from golden parachute limits (PDF) that come with accepting bailout money.

"It smells like he moved the retirement date up to avoid [those limits]," said Paul Hodgson of the Corporate Library, a corporate-governance research firm. And the government's millions "make it a lot easier for the company to pay it out."

The move has proven controversial. After South Carolina's The State reported on suspicions of the deal's timing, Gov. Mark Sanford (R) called for the Treasury Department to investigate and said Whittle seemed to be "gaming the system." A spokesman for the governor said he had yet to receive a response from Treasury.

"The whole idea was to avoid these types of arrangements," Laurence Wagman of compensation consulting firm James F. Reda & Associates told us. The Treasury "doesn't want the companies receiving taxpayer funds, terminating executives and having them walk away with excessive golden parachutes."

Whittle's plans to retire had been announced Sept. 5 -- before the worst of the credit crisis and a month before Congress passed the $700 billion bailout. The company said then that Whittle would retire by year's end.

But on Oct. 24, shortly after the bank announced that it would be applying for bailout money, the bank decided that Whittle would be retiring early the next week. Whittle's successor had yet to be named, and no reason was given for the earlier date.

The $18 million package "reflected [Whittle's] 20 year career with [South Financial Group] as its founder and only CEO," the bank said in a statement. (We called the bank and they referred us to the statement.) In addition to a $4 million cash severance payment and $9 million pension benefit, the plan came with a number of side perks like a $133,920 auto allowance and $75,000 for "financial planning."

Under Whittle, the bank grew to be the largest based in South Carolina, with $13.7 billion in total assets and 180 branch offices in Florida, North Carolina and South Carolina. But the bursting of the housing bubble has hit the South Financial Group hard. Since the beginning of 2007, the bank's stock has fallen sharply from above $26 to about $3.50 today. The bank booked a $25 million net loss in its third quarter.

Under the Treasury's program to buy equity stakes (which has so far approved investing $177.6 billion in 76 banks), the banks are restricted in the amount they can pay to departing top executives. The amount is capped at three times the exec's average annual compensation.

That can still add up to quite a hefty sum for a CEO who makes millions every year. South Financial has said that "less than 15%" (or about $2.7 million) of Whittle's package would have been over that limit.

Pensions, for example, can still be unlimited. So Whittle would still have gotten his $9 million pension benefit.

In fact, the widespread ingenuity of executive compensation packages means that an executive at a bank that's taken federal money could walk away with tens of millions even while abiding by the limits. The Wall Street Journal reported last month that the country's biggest banks owe their executives billions in deferred pay and special executive pensions.

Meanwhile, corporate governance analyst Hodgson said that Whittle's deal -- nominally a retirement, but treated as a severance -- is all too typical of golden parachutes: "If you and I decided to retire, we might get what's left of our 401(k). But for some reason the rules seem to be different for executives. They get severance even though they're retiring. There's no logic to it at all."