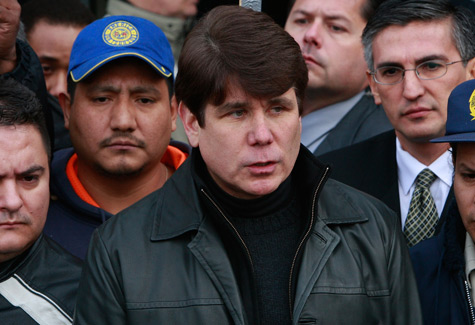 Illinois Gov. Rod Blagojevich had the sole power to replace Barack Obama's seat in the Senate. That's unlikely to be the case for long, since FBI agents arrested him this morning for, among other charges, conspiring to offer the Senate seat in exchange for personal benefits.

Blagojevich, 51, was charged with conspiracy to commit mail and wire fraud and solicitation of bribery. The FBI also arrested Blagojevich's chief of staff, John Harris.

The criminal complaint against Blagojevich (PDF) alleges that the Democratic governor was recorded on FBI wiretaps during the last month conspiring to sell or trade Obama's Senate seat for financial and other gains for himself and his wife.

Last week, Blagojevich allegedly told an adviser that he might "get some (money) up front, maybe" from a candidate hoping to replace Obama. The candidate was identified only as "Senate Candidate 5."

The complaint, brought by the U.S. Attorney's Office for the Northern District of Illinois, also alleges that Blagojevich threatened to withhold substantial state assistance to the Tribune media company to induce the firing of Chicago Tribune editorial board members sharply critical of Blagojevich. Blagojevich is also accused of obtaining campaign contributions in exchange for official actions.

In a press conference yesterday, Blagojevich said he had done nothing wrong and welcomed being wiretapped because his discussions were "always lawful."