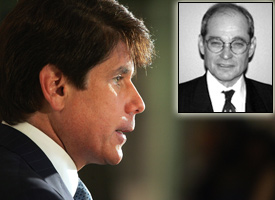 Sheldon Sorosky, who is representing Illinois Gov. Rod Blagojevich in his federal corruption case, also currently serves as the chairman of a state criminal justice agency.

Blagojevich appointed Sorosky to the non-paid position in 2003. Although Sorosky's term as chairman was supposed to expire in January 2007, he remains atop the board.

Sorosky, a former Cook County assistant state's attorney and now a private criminal defense lawyer, is defending Blagojevich against charges (PDF) of bribery and fraud that include allegations he conspired to offer Barack Obama's vacant Senate seat in exchange for personal benefits.

Sorosky, meanwhile, serves at the will of Blagojevich on the board of the Illinois Criminal Justice Information Authority, which controls federal law enforcement grants and advises the governor on criminal justice policies, among other tasks.

Cindi Canary, director of the Illinois Campaign for Political reform, said Sorosky should withdraw from one of his roles.

"I don't know if it presents a true conflict, but given the severity of [Blagojevich's charges], it would be better to have him separate from either this client or this agency," she said. "Pick your master."

Canary added that the Blagojevich administration has been "remarkably tardy" in appointing replacements for expired positions like Sorosky's.

Before receiving the appointment, Sorosky donated $3,000 to Blagojevich's various campaigns, dating back to 1993. (Blagojevich is accused of, among many other allegations, obtaining campaign contributions in exchange for official actions. Federal authorities have never suggested Sorosky played a role in any of Blagojevich's alleged schemes.)

The 21-member volunteer state board that Sorosky chairs consists of state and local criminal justice officials and experts from the private sector, according to the agency's Web site.

The site said the board's chairman is paid. But the agency's public information officer said Blagojevich eliminated that feature of the position, and that the site is outdated.

"Basically he oversees the authority board, he runs the board meetings, he provides expertise on a number of criminal justice issues that come up at the meetings," said Kristin Evans, the public information officer.

Evans declined to comment on whether Sorosky's dual role as the governor's personal attorney and the agency board chairman presented a conflict of interest.

ProPublica called Sorosky to ask whether he has represented Blagojevich in the past. We'll post an update if we hear back.

The Wall Street Journal's law blog noted today that in 2004, Sorosky won a state court acquittal for Deborah Mell, Blagojevich's sister-in-law, who was arrested that year in Chicago during a rally for gay marriage rights. Mell allegedly charged and knocked over a Chicago police officer at the protest. She was elected last month to the Illinois House of Representatives.