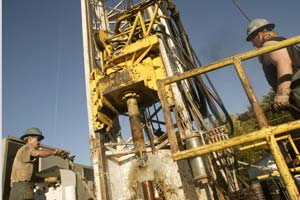 A federal study of hydraulic fracturing set to begin this spring is expected to provide the most expansive look yet at how the natural gas drilling process can affect drinking water supplies, according to interviews with EPA officials and a set of documents outlining the scope of the project. The research will take a substantial step beyond previous studies and focus on how a broad range of ancillary activity – not just the act of injecting fluids under pressure – may affect drinking water quality.

The oil and gas industry strongly opposes this new approach. The agency’s intended research "goes well beyond relationships between hydraulic fracturing and drinking water," said Lee Fuller, vice president of government affairs for the Independent Petroleum Association of America in comments (PDF) he submitted to the Environmental Protection Agency.

The "lifecycle" approach will allow the agency to take into account hundreds of reports of water contamination in gas drilling fields across the country. Although the agency hasn’t settled on the exact details, researchers could examine both underground and surface water supplies, gas well construction errors, liquid waste disposal issues and chemical storage plans as part of its assessment.

The EPA begins public hearings today in Washington to nail down the scope of the study.

Plans for the study have attracted international attention and have been the focus of intense debate among lawmakers and the oil and gas industry. The findings could affect Congress’ decision whether to repeal an exemption that shields the fracturing process from federal regulation under the Safe Drinking Water Act.

The EPA is undertaking the study in response to a wave of reports of water contamination in drilling areas across the country and a Congressional mandate issued in an appropriations bill last fall. The agency had previously examined hydraulic fracturing in a 2004 study that was limited in scope and was widely criticized.

"When we did the 2004 study we were looking particularly for potential for impacts from hydraulic fracturing fluid underground to underground sources of drinking water," said Cynthia Dougherty, the EPA’s director of the Office of Ground Water and Drinking Water. "So it was a much narrower focus."

For the latest study, the EPA sent its scoping document to its Science Advisory Board asking for the group’s input in designing the fracturing study. In the document, the EPA explained that information gained from looking at the impact from the start to the end of the process, called a lifecycle assessment "can help policymakers understand and make decisions about the breadth of issues related to hydraulic fracturing, including cross-media risks and the relationship to the entire natural gas production cycle."

Fuller’s definition of fracturing-related contamination helps explain the oil and gas industry’s steadfast claim that that there is not a single case in which hydraulic fracturing has been proven to have contaminated drinking water supplies.

An 18-month investigation by ProPublica, however, has shown more than 1,000 cases in which various aspects of the fracturing lifecycle have affected water supplies, including spills of fracturing fluid waste, cracking of underground cement and well casings meant to enclose the fracturing process, and methane gas traveling large distances underground through faults and fractures.

In planning its study, the EPA has made clear that for its purposes fracturing may play a role in many aspects of the drilling process and in many different environmental risks. The study could examine how well-construction activities have the potential to impact water, what specific materials or design practices would make a well suitable for fracturing, and what are the most effective methods for measuring well integrity.

The EPA hopes to complete its research by late 2012, the end of President Obama’s first term in office. Scientists say that may not be enough time to include substantial field monitoring and water analysis; policymakers say that is too long to wait for a decision from Congress.

The agency’s conclusions could have wide-ranging effects. Last month President Dmitri Medvedev of Russia said he would curtail natural gas production by the state company Gazprom until the study is completed. In part that’s because Medvedev isn’t sure there will be a viable market for Russian gas if the U.S. develops its domestic reserves, and because he believes that the regulations that could result from the EPA study could determine whether the U.S. drills its own gas, or imports it from overseas.

If the comments already submitted to the EPA by stakeholders are any indication, the research process will be contentious.

In Fuller’s comments (PDF) to the EPA, he said that the study shouldn’t focus on the harm fracturing could inflict on water supplies, but rather on whether current environmental regulations "effectively manage the environmental risks of the fracturing process."

"If these risks are well managed, the other questions are meaningless," he wrote. "The Scoping Materials Document fails to reflect this reality."

In another letter (PDF), Ben Wallace, chief operating officer of Penneco Oil Co., wrote: "The clear historical record shows that hydraulic fracturing has been employed for decades successfully without incident. We are concerned that bureaucratic machinations have caused the EPA to hypothesize a problem and that EPA is now seeking research to justify a solution to a nonexistent problem."

Environmental officials from New York City, who are concerned about how plans to drill for gas in the state’s Marcellus Shale will affect the city’s water supply, also submitted comments (PDF) to the EPA, urging the agency to follow through with its ambitious plans.

"The City concluded that horizontal drilling and high-volume hydraulic fracturing using the current technologies pose an unacceptable threat to the water supply of nine million New Yorkers, and cannot be safely permitted in the watershed," wrote Caswell Holloway, commissioner of New York City’s Department of Environmental Protection. The city encouraged the Science Advisory Board and the EPA "to take a hard look at this activity and to recognize that the absence of contamination does not necessarily imply an activity is safe, but may actually reflect extensive gaps in monitoring information."