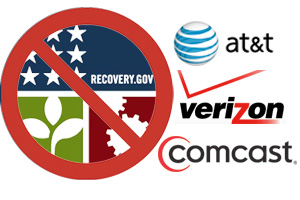 Major broadband carriers are turning their backs on stimulus money, reports The Washington Post. The stimulus package offers $7.2 billion in grants to spread high-speed Internet access, but three big players — AT&T, Verizon and Comcast — have decided not to apply for the funds, according to industry sources. The companies are reportedly concerned about the scrutiny that would come with accepting the money, as well as a condition that would prevent them from favoring some applications and content over others, a rule known as net neutrality.

Meanwhile, the application deadline for some of those broadband grants has been extended — because government servers couldn't handle the broadband traffic. According to a notice (PDF) posted on BroadbandUSA.gov, the deadline for electronic applications has been pushed back a week, because the online application system "has experienced service delays due to the volume of activity from potential applicants."

Should there be a second stimulus package? The New York Times hosted a virtual debate on the question between two economists: Casey B. Mulligan, a professor at the University of Chicago, and Dean Baker, co-director at the Center for Economic Policy Research. Opening arguments took place Monday; the rebuttals were posted today. Who do you think won? E-mail us and we’ll include our favorite responses in a future roundup.

Fox News has released poll results showing that 72 percent of Americans believe giving what's left of the $787 billion in stimulus money to taxpayers would do more to boost the economy than letting the government spend it. A polling company asked (PDF) the following question: "So far only a small amount of the $787 billion dollars in economic stimulus money has been spent. Which do you think would do more to boost the economy -- the government spending the rest of the stimulus money or the government returning the money to the taxpayers?" Just 19 percent of respondents chose the first option, according to Fox.