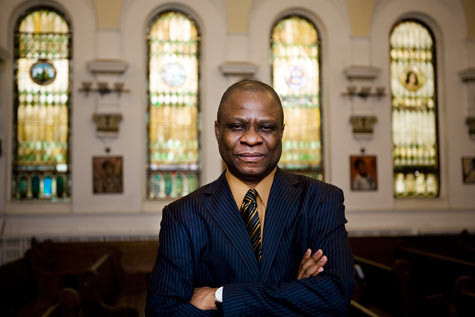 A year ago this month, President Bush sent a letter to Chigozie Okorie, the 10-year-old son of a Nigerian-born Presbyterian minister, who was seeking a pardon for his dad. The letter, on White House stationary, didn’t acknowledge the request. Instead, Bush wrote: "Laura and I hope the coming year brings joy and peace to you and your family."

Five days later, the Okories learned that Roger Adams, Bush’s pardon attorney at the Department of Justice, had been removed from his job for making racist statements about the older Okorie while reviewing his case and recommending that his application be denied.

As the Bush administration enters its final days, Chibueze Okorie and his son are hoping for a last-minute change of heart from the outgoing president. Okorie’s lawyer, who served as the U.S. pardon attorney under Bush’s father, believes the case, tinged by charges of racism, deserves to be reconsidered.

The older Okorie, who drove a van for an East New York drug ring, pleaded guilty in 1989 to possessing heroin with intent to distribute. Facing a 7-year-sentence, Okorie agreed to help prosecutors. A judge sentenced him to the 18 months in prison he had already served and noted his cooperation, according to his lawyer, Margaret Colgate Love.

Okorie turned his life around in prison, went to seminary school after his release and has served as director of evangelism and prison outreach at his Brooklyn church for nearly two decades.

Still, he faces deportation back to Nigeria and separation from his American-born child, his Brooklyn church and the men he ministers to in prison.

"A pardon is the only way for him to avoid being deported," Love said. Any non-citizen, including those with green cards, can be deported if convicted of a serious offense. But Okorie’s case stands out among the more than 1,700 petitions that Bush has denied in the last eight years.

According to an investigation of the case by the department’s Office of the Inspector General, Adams told a colleague that Okorie was "about as honest as you could expect for a Nigerian. Unfortunately, that's not very honest." When asked about the remark, Adams told investigators that he believes Nigerian immigrants "commit more crimes than other people," and that an applicant’s ethnic background is "an important consideration" in the pardon’s process. "It’s one the White House wants to know about," Adams said.

"We believe that Adams' comments - and his use of nationality in the decision-making process - were inappropriate," the report concluded. "We were extremely troubled by Adams' belief that an applicant's 'ethnic background' was something that should be an 'important consideration' in a pardon decision."

"I wish I could talk to George Bush face to face," the 47-year-old Okorie said during an interview this week at the Church of Gethsemane, a modest house of worship also used by Kolot Chayeinu, a Jewish congregation in the liberal, upper-middle-class neighborhood. "I wish I could show him what is in my heart and introduce him to my son."

Okorie’s case has been championed by the New York Daily News, and Love stepped in to represent him once the petition was denied.

With Okorie set to face another immigration hearing this spring, Love said she has gone "directly to the White House to get his case reconsidered."

As pardons attorney during the presidencies of George H.W. Bush and Bill Clinton, Love said she was stunned to learn that "a pardon attorney can be dismissed for race discrimination and that the very case that led to that decision still wound up with a recommendation against clemency. "

She has been in direct contact with the White House counsel’s office but has no idea whether Okorie is being reconsidered or whether the president will issue additional pardons before he leaves office. Bush granted 19 pardons on Dec. 23rd. But the next day, the White House announced, in an unprecedented move, that it was reversing the pardon granted to Isaac Toussie, a Brooklyn real estate developer who pleaded guilty to fraudulently obtaining mortgages.

The White House said in a statement that the pardon had been granted on the recommendation of White House counsel Fred Fielding and not the current pardon attorney, Ron Rogers, who succeeded Adams last year. The reversal, according to the statement, was based on new information that had been unknown to Fielding. Toussie had been represented by a former White House lawyer, and his father, Robert Toussie, made large donations to the Republican National Committee last year.

Bush has granted relatively few pardons – just 171 – in eight years in office and has commuted sentences for nine others. Pardon experts believe he could issue more before he leaves office and speculation is high that Vice President Dick Cheney’s former chief of staff, I. Lewis "Scooter" Libby, will be pardoned. Libby was convicted of perjury and obstructing justice in the FBI’s investigation into the leak of the identity of a former CIA officer.

Clinton wrote a letter on Okorie’s behalf to immigration authorities asking that proceedings against him be dismissed. "Mr. Okorie’s story of rehabilitation after a criminal conviction, his unusual and enormous contributions to his community and his strong and loving relationship with his…son, strongly commend him as a case for favorable exercise of discretion," Sen. Clinton wrote in June 2005.

"I am remorseful every day and I ask for forgiveness every day," Okorie said. "And I believe that people can be forgiven and that people can change. I think President Bush believes that too."