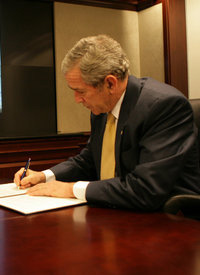 President Bush has vetoed fewer bills than any president since Warren G. Harding, but not because his views always jibe with Congress. He prefers a suppler, quieter tool that can't be overturned by congressional majorities: the signing statement.

Bush has used these statements -- historically deployed for commemorating special occasions or voicing a president's reservations -- to approve a law but sidestep specific provisions, like statutes banning torture, requiring appointees to have relevant experience and providing whistleblower protections.

Critics say the statements, which went mostly unnoticed until the middle of Bush's second term, usurp Congress' constitutional right to make laws and violate the separation of powers. But hope is just around the corner for the signing statement opponents.

"They will mean nothing" once Bush leaves office, said Stephen Saltzburg, a law professor at George Washington University and member of an American Bar Association task force that studied, and ultimately condemned (PDF), the practice of using signing statements to reject statutes. Presidents should veto laws they believe are unconstitutional, the task force said.

Though the statements aren't legally binding, they send the message to executive branch agencies that they may ignore certain laws, usually on the contention that they impinge on the president's constitutional authority. Agencies that have adopted such presidential advice as policy could still be affected when President-elect Barack Obama's appointees inherit the "status quo," Saltzburg said.

Neal Sonnett, a Miami lawyer who led the Bar Association task force, suggested that Obama make a general statement withdrawing the Bush signing statements to assure a clean break. But Sonnett and others believe the most conspicuous statements -- and their effects -- will be obvious to the newcomers.

One notorious statement rejected the McCain amendment's provision banning the "cruel, inhuman, or degrading treatment or punishment" of detainees in U.S. custody, anywhere in the world. Bush backed Sen. John McCain and signed the law, but in his attached statement, argued that the provision would undermine his authority "to supervise the unitary executive branch" and his ability to protect Americans from future terrorist attacks.

"[T]he McCain amendment prohibited torture of detainees, and Bush said he would interpret that according to his own interpretation of torture," explained Louis Fisher, an expert on separation of powers with the Law Library of Congress. "Bush had one position, and Obama can have a totally separate one."

The president-elect has tiptoed around the issue, telling supporters at a rally in May, "We're not going to use signing statements as a way of doing an end-run around Congress." Though he stopped short of a pledge to renounce the practice, he's further enthused signing statement critics by appointing one of their own, Dawn Johnsen, to run the Office of Legal Counsel.

Some scholars, though skeptical of Bush signing statements that challenge and nullify laws, concede they do have their purposes. The statements can be useful for clearing up legislative ambiguities and questioning constitutionality in exceptional cases, as well as for more traditional purposes. To make that point quickly, Obama should slap a friendly, rhetorical statement to the first law he signs, said Christopher Kelley, a political scientist at Miami University (of Ohio), in an e-mail.

"That will get the question of whether he will use one out of the way," explained Kelley, "and because the rhetorical statements generally do nothing substantive, such as nullifying sections of law, it should cause the attention to wane."