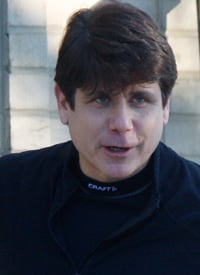 Facing 30 years in prison on corruption charges, Illinois Gov. Rod Blagojevich is assembling the best defense team money can buy. The question is, whose money?

There has been speculation that Blagojevich will use his expansive campaign war chest, $3.6 million at last count, to pay for his defense.

Can he really do that?

To paraphrase a fellow Chicagoan: Yes he can!

State law does not prevent the Democratic governor from tapping his campaign committee's funds to pay legal bills, even though he stands accused of illegally soliciting and obtaining some of the funds in exchange for official actions.

"This is symptomatic of campaign finance laws in Illinois: Fast and loose rules the day," Jay Stewart, executive director of the Better Government Association in Chicago, told ProPublica.

The law prohibits several uses of campaign bucks for personal expenses, such as clothing and laundry. Defending public corruption charges isn't mentioned in the statute.

The exact rules, especially in Illinois, are far from clear. "It's in a gray area to say the least," said Rupert Borgsmiller, director of campaign disclosure for the Illinois State Board of Elections. "We really haven't had it tested."

Illinois, along with almost all states, generally follows the Federal Election Commission's rules that allow federal politicians to use campaign funds for defending charges related to being in office. (Because again, there is no clear rule, officeholders often ask the FEC for an advisory opinion on the use of funds, as Rep. Randy "Duke" Cunningham (R-CA) and Sen. David Vitter (R-LA) did in recent years.)

"Even though it's not part of your job to be shaking down people," those allegations directly relate to Blagojevich being in office, explained Robert Stern, president of the non-profit Center for Governmental Studies. "If he'd murdered someone, he'd have a tougher time doing it."

In any case, Blagojevich certainly could find the cash handy.

The FBI allegedly recorded Blagojevich discussing his dire financial situation with his chief of staff and now co-defendant John Harris. On Nov. 7, Blagojevich said he needed to consider his family and that he was "financially" hurting, according to the criminal complaint (PDF) against the governor.

"I want to make money," he allegedly said.

Blagojevich's pockets only became smaller recently when he hired famed Chicago defense attorney Ed Genson, who successfully (but not cheaply) represented singer R. Kelly. Blagojevich also reportedly owes $500,000 to his previous attorneys at Winston & Strawn, which has already pocketed $2 million from the governor.

"It's a monster of a case with a lot of billable lawyer hours," Cotter told ProPublica.

But Blagojevich still faces obstacles to withdrawing the money. The courts, for instance, could intervene, as New Jersey state appellate judges recently did to prevent a former state senator from accessing campaign dollars for his federal corruption trial.

Ryan's case was the first time such a committee had been indicted for racketeering, though other campaigns, including President Richard Nixon's, were previously charged with other criminal offenses. Ryan is currently serving a 6 1/2 year term in federal prison for racketeering and fraud.

The future of Blagojevich's committee seems similarly bleak, given that the FBI raided its offices last week. The committee also is featured prominently in the government's criminal complaint against Blagojevich.

According to the complaint, on Dec. 5 Blagojevich and three associates discussed the possibility of moving money out of the committee to an unidentified criminal defense attorney to avoid it being frozen.

We asked a Blagojevich spokesman to tell us how much money remains in the committeeâs account and whether the governor plans to use it for his defense. Weâll let you know if the governorâs office calls us back.