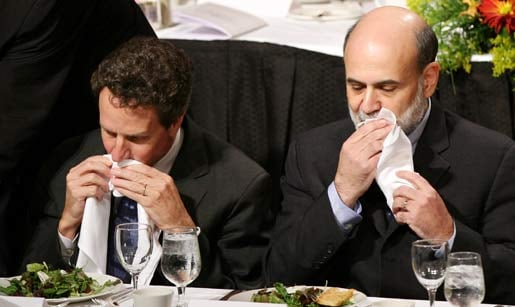 Treasury Secretary Timothy Geithner insists that he didnât know the timing or size of the AIG retention bonuses that have caused so much fury over the last few days.

"I was stunned when I learned how bad this was on Tuesday [March 10]," Geithner said. "I shouldn't have been in that position, but it's my responsibility and I accept that."

The Post reported that Geithner was able to stop hundreds of millions in other payments, but that hasnât satisifed many lawmakers or commentators. They point out that Geithner was a key designer of the original AIG bailout back in September, and that he attended many of the crucial meetings where decisions were made about the company.

Congress yesterday asked AIG to hand over their minutes for all board meetings attended by the Federal Reserve Bank or the New York Fed. If AIG does so, those documents could reveal exactly who was present when the bonuses were discussed.

Geithner is facing mounting pressure over the issue, with Republicans calling for his resignation.

Heâs not the only one defending his actions. Last night Sen. Chris Dodd, D-Conn., admitted that he introduced the language into the stimulus legislation that protected AIGâs bonuses. Before the bill passed in February, lawmakers debated provisions that would have capped and/or taxed bonuses received by executives at institutions receiving federal bailout money.

The Hartford Courtant said Dodd originally had a provision in the stimulus bill that retroactively would have limited executive bonuses. The administration wanted restrictions only on future compensation.

"I did not want to make any changes to my original Senate-passed amendment, but I did so at the request of administration officials, who gave us no indication that this was in any way related to AIG," Dodd said.

The senator would not name the "administration officials," but The Wall Street Journal reported today that Geithner was involved in lobbying on the issue:

"The Obama administration had not tried to hide its concern about the moves to clamp down on executive compensation. Both Treasury Secretary Timothy Geithner and National Economic Council Director Lawrence Summers lobbied Mr. Dodd to make changes.

Administration officials said the Treasury didn't suggest any language or say how the amendment should be changed. They said they noted legal issues that could likely lead to challenges, but was the end of their involvement. The official said Mr. Dodd and Congress made the final changes on their own."

As has been pointed out before, Dodd is the top recipient of political donations from AIG employees. The AIG Financial Products unit, which wrote the $2.7 trillion of bad bets that pushed the company to near collapse, is headquartered in London and the senatorâs home state.

At issue are $165 million in retention bonuses paid to executives of the AIG financial unit. Summers has said the administration has no legal grounds to stop the bonuses. The Journal reported that AIG CEO Edward Liddy had asked  execs to voluntarily give up the bonuses, or reduce them by half, and that some have said they will do so.