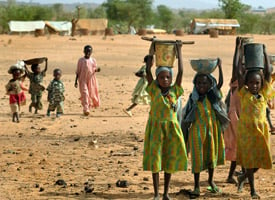 It was an inspired idea -- bring independent radio programming to one of the most isolated, war-scarred regions of the world, providing millions of displaced Darfuris with news about the political, military and humanitarian responses to their plight.

"The idea was to accurately report what was going on," former Special Envoy for Darfur Andrew Natsios, who left his post before the program was launched, told ProPublica. "Both the government and the rebels were manipulating the people by lying to them and withholding information."

But critics charge that the program -- meant to provide displaced people in Sudan with "accurate and objective information about their country" -- is instead broadcasting in a language most of its target audience doesn't understand and has watered-down criticisms of Sudanese officials (whom the U.S. government holds responsible for genocide in Darfur). An outspoken Darfuri-American news reader who repeatedly challenged the program's non-Darfuri editors has also been fired.

After questions from Congress, the federal agency charged with overseeing the broadcasts, the Broadcasting Board of Governors, began reviewing the allegations.

The program's defenders counter that actions taken to preserve balance are being perceived by Darfur human rights activists as bias. "Conflicts within the communities that are in conflict can spill over in terms of conflicts within the broadcasting," Letitia King, director of public affairs for the International Broadcasting Bureau, a part of the Broadcasting Board of Governors, told ProPublica.

Radio Afia's first broadcast was on Sept. 29, 2008. The news was and continues to be delivered in standard Arabic, which differs significantly from the local version of Arabic spoken in Darfur, according to James Dickins, a professor of Arabic at the University of Salford, England, who specializes in Sudanese dialects.

Three Darfur-born employees of Radio Afia tried to impress on their employers that standard Arabic was not only incomprehensible to the program's intended audience, it was also offensive because it was associated with the people who were killing them.

The "language issue is very sensitive," they wrote (PDF) in a draft of an October 2008 letter to the president of the network that produces the program. "The majority of Darfuris in the IDP camps -- the victims -- suspect any broadcasting in the language or accent of the central Government or the Janjaweed tribes."

By contrast, another independent news program created for Sudan by the United Nations includes programming in "simple" Arabic. A radio program for Darfur launched by the Dutch media organization Press Now translates the news into both the local version of Arabic and three non-Arabic languages spoken by the main tribes displaced by the violence.

"Given the grant amount and urgency to begin broadcasts, there was neither the resources nor the time to support broadcasting in three languages," the BBG's King told ProPublica in an e-mail. King said that the use of local reporters and local interviews means that large portions of the program include voices speaking in the Darfuri dialect.

Radio Afia originates from the studios of Springfield, Va.-based Middle East Broadcasting Networks, Inc., which is also overseen by the BBG and focuses on communicating with the Middle East, not Africa. (A ProPublica investigation last summer detailed the failings of AlHurra, the U.S. government-funded Arabic TV station, which is also managed by MBN.)

Radio Afia's two news editors, longtime veterans of the Voice of America, are both Sudanese, but they are not from Darfur.

Former Radio Afia news reader Mohamed Suleiman -- one of the three Darfur-born news readers -- told ProPublica he repeatedly clashed with his Sudanese editors when they argued that events in Darfur did not amount to genocide and when they asked him to focus his interviews with camp residents on their food and medical needs rather than on reports of government harassment and violence. (The Broadcasting Board of Governors, through King, refused ProPublica's request to interview the editors.)

In December, Suleiman's employment was terminated. "I am very confrontational," Suleiman told ProPublica. "Anything I see wrong I just voice it."

A U.S. government official, who requested anonymity because she is not authorized to speak on behalf of the program, said that Suleiman was an activist on behalf of his suffering community. "We can't allow ourselves to be hijacked by people regardless of how right they may be," she said. "That's not what news is.”

If Suleiman, an engineer by training with little traditional journalistic experience, was seen as an activist (he wrote commentary on the Darfur conflict for years), that raises the question of why he was hired to work at Radio Afia in the first place.

The journalistic code of ethics governing the broadcasts requires that opposing views be presented, and that journalists' personal opinions or judgments be left out of factual reporting.

Suleiman's firing has led to a volley of protests from other activists. "He's a trusted colleague," said Sam Bell, director of advocacy for the Genocide Intervention Network. "It seems that information [on Afia Darfur] is being corrupted in precisely the same ways that the Sudanese government is filtering information."

Several congressional representatives have also become involved. On Jan. 15, U.S. Congressman Frank Wolf formally requested (PDF) that the Broadcasting Board of Governors investigate Suleiman's firing, writing to the board's executive director, Jeff Trimble, that "it would be deeply troubling if there were any evidence of manipulation of content on the air."

Letitia King, the BBG spokeswoman, told ProPublica in an e-mail that "the Board is carefully reviewing the issues recently raised concerning Radio Afia and understands the tremendous importance of fulfilling our journalistic mission to provide accurate and balanced news and information."

With an uptick in violence in Darfur over recent days, there is one point on which most of those involved seemed to agree: Getting news to Darfuri civilians is more important than ever.