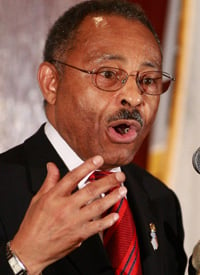 Roland Burris has blamed state lawmakers for his shifting accounts of how he became a senator. The lawmakers, he said, failed to elicit the full story when they questioned him in early January at an Illinois House committee hearing.

But a close review of the hearing’s transcript (PDF) shows that Burris’ testimony -- which he has since repeatedly revised -- came in response to direct questions about both his contact with allies of former Governor Rod Blagojevich and an $800,000 loan he received in 2002 from his biggest donor.

ProPublica and the Chicago Tribune detailed Burris’ relationship with the donor, Chicagoland businessman Joseph Stroud, earlier this month. Stroud’s donations, $1.5 million in all, accounted for more than 70 percent of Burris' political fund when he unsuccessfully ran for governor in 2002. The $800,000 loan, which remains unpaid, is the biggest single Illinois gubernatorial contribution since records went online in 1994, according to the State Board of Elections.

At the committee hearing, Republican state Rep. Jil Tracy asked Burris this question: “So you have -- do you remember when the last time you might have discussed this campaign donation or understood it's just not going to be repaid?’’

“It has never come up since I lost my primary in '02,” Burris replied.

False. Shortly after the 2002 campaign ended, Burris phoned prosecutors and local police about criminal charges Stroud wanted filed against a former employee who had sued him, claiming wrongful termination, court records show. In 2005, Burris discussed these calls and Stroud’s donations in a sworn deposition and at trial in the former employee’s lawsuit.

“I clearly think testifying in a deposition, talking with attorneys and testifying in open court would be considered ‘discussing’ it,” said Martin Dolan, the lawyer who represented the former employee. “Whatever way you want to spin it, it certainly was discussed after his gubernatorial loss in 2002.”

Burris’ claim that he hadn’t talked about the donations since 2002, “defied logic,” Rep. Tracy told ProPublica. “I hope we can get to the bottom of this.”

Tracy also questioned Burris about conversations he had with Blagojevich’s allies in the lead up to his Senate appointment.

Burris first claimed in a written statement to the House committee that he'd had no contact with Blagojevich or his representatives before the then-governor offered him the post in late December. In his later testimony, Burris admitted to sharing his interest in the Senate job in July or September with Blagojevich's former chief of staff and a current state lobbyist, Lon Monk.

Tracy then asked Burris: “So you don't recall that there was anybody else besides Lon Monk that you expressed that interest to at that point?

“No, I can't recall,” Burris replied.

Tracy gave Burris one last chance to come clean at the January hearing, asking him, “Is there anybody that comes to mind in that light?”

Burris recalled that a man from New Jersey contacted him, but didn’t specify anyone else. “I can certainly give you a few names, but I can't give you the thousands of people who were involved in this.”

It wasn’t until Feb. 4 that Burris sent the committee an affidavit admitting to conversations with five other Blagojevich allies, including John Harris, the former governor’s chief of staff, and Rob Blagojevich, his brother.

The U.S. Senate Ethics Committee launched a preliminary inquiry into Burris this week after a local state's attorney opened a perjury investigation. Pat Quinn, who became Illinois’ governor after Blagojevich was impeached last month, called on Friday for Burris to resign.

“[Burris is] either lying or he’s lost his faculties, and I don’t think he’s that infirmed,” David Lundy, acting executive director of the Better Government Association and a non-practicing attorney said in an interview.

But proving that Burris committed perjury could be challenging, Lundy said. After all, Burris said he “can’t recall” talking to any Blagojevich insiders besides Monk, not that he certainly didn’t have other conversations about the Senate seat.

We called a Burris spokeswoman for comment but did not hear back.

Burris has avoided mentioning his exchange with Tracy, instead focusing on questions he fielded from Republican state Rep. Jim Durkin.

Durkin asked whether Burris spoke with, “any members of the governor's staff or anyone closely related to the governor, including with family members or any lobbyists connected with [Blagojevich].” Durkin then specified Rob Blagojevich, Lon Monk and John Harris, among others.

After conferring with his attorney off-mic, Burris said, “I talked to some friends about my desire to be appointed, yes.” He then detailed his conversation with Monk but did not mention any of his contacts with Rob Blagojevich or Harris.

At a press conference earlier this week, Burris said, “There's a 'yes' answer in that it means I talked to all of those individuals.”

Burris didn’t mention everyone he’d spoken to, he said, because Durkin “took us off in a different direction” that didn't allow him to complete his answer. “Why didn't he come back to those [others] if he was interested in them?” Burris said of Durkin.

In an interview, Tracy said, “I think [Burris] definitely lied. Selective memory is too kind to say.”