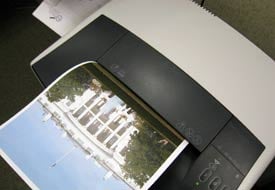 With the Bush administration’s well-earned reputation for secrecy, Democrats are concerned that the administration will rev up the paper-shredder as its White House days draw to a close. After all, Cheney has said that he is not part of the executive branch, raising eyebrows and questions about whether his office is covered by records laws.

The White House insists, somewhat obliquely, that it will abide by the law.

But just what are the rules governing what documents need to be saved?

The requirement that presidents save their records has a relatively short history. Until Reagan, presidents left their documents to presidential libraries on their own terms. But the struggle over Nixon’s records in the wake of Watergate convinced Congress that a better system was in order, and it passed the Presidential Records Act in 1978, meant to apply to any administration after 1981.

The act requires presidents and vice presidents to turn their records over to the National Archives, which processes them and makes them available to the public after a limit of 12 years.

What is preserved under the law:

Public disclosure is a separate matter and subject for the most part to the same restrictions that apply to FOIA requests. Bush signed an executive order in 2001 designed to give current and former presidents and vice presidents—and their descendants—greater authority to keep prying eyes away from documents of past White House occupants, living and dead.