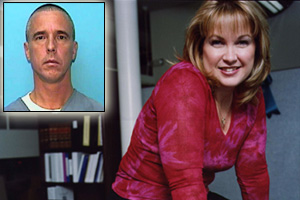 David Shaw, a wiry 27-year-old with a history of burglary and theft convictions, had already raped one woman when he attacked Kellie Greene in 1994.

On Jan. 18 of that year, Shaw saw the 28-year-old cocktail waitress returning home to her apartment in downtown Orlando, Fla.

At about 11 p.m., Greene went to do laundry. When she got back, Shaw was hiding in her kitchen. He pounced, slamming a teakettle over her head.

"Take my money! I have money!" Greene shouted as she fought back. But Shaw knocked Greene to the floor where he raped and beat her for almost an hour.

After Shaw fled the apartment, Greene managed to dial 911.

When police arrived, they found semen on her leggings. But because Orlando's crime lab could only afford to test DNA in cases where suspects were already identified, this crucial piece of evidence in Greene's case became backlogged.

Greene tried to move on, but she was haunted by the attack and eventually was diagnosed with post-traumatic stress disorder. "It was an ordeal everyday just to get out of bed," she recalled.

While recovering, she read up on DNA and kept calling the detective assigned to her case. In April 1997, more than three years after the attack, the detective called back with good news: DNA testing had finally identified her rapist. Sure enough, there was a match to Shaw.

"It was the first time in three years that I felt safe," Greene said.

But Greene's relief turned to anger when she learned that Shaw had raped another woman six weeks before he attacked Greene. His DNA had been collected from the crime scene in that case -- but for two years it had been shelved away, untested, in a crime lab.

"Had they been able to test the DNA in that earlier case, my rape would have never happened," she said.

Shaw was already in prison serving 25 years for the first rape when he pleaded guilty to raping Greene. She didn't learn until three years later that a judge had allowed Shaw to combine sentences for the two crimes. That meant he would spend no extra time in prison for attacking Greene.

Outraged, Greene sprang to action. In 2000, she lobbied for -- and helped write -- a Florida law that bans combined sentences. She also created Speaking Out About Rape, or SOAR, an advocacy group that runs awareness, education and prevention programs for rape survivors.

"I want rape survivors to know that they can be empowered; get back to being themselves and living their lives," she said.

Greene has also spoken out about the national DNA backlog, discussing her ordeal with politicians, other rape victims and in an appearance on the "Oprah Winfrey Show." With each speech she makes the same point: "If there weren't a backlog, we'd be getting these criminals off the streets."