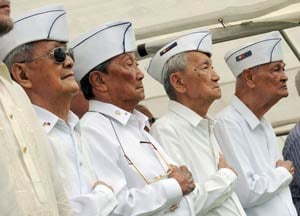 A favorite sales pitch for the $787 billion stimulus package was the promise by congressional Democrats to put self-interest aside: The bill would be free of earmarks, pork and pet projects.

"This bill contains no congressionally directed spending," one mass e-mail message from Senate Democrats pledged. That means no money requested by specific senators for states, districts, or municipalities without formula-driven or competitive processes to determine the recipients.

Before the bill passed, we found plenty examples that pretty much met that definition in the stimulus. And as the bill cleared its final legislative hurdles Friday, so did some congressional Democrats who tallied their handiwork in dispatches to constituents. Members switched from guarded rhetoric about a pork-free package to messages plugged with lardoons to highlight local projects, industry boons and in some cases, specific programs squeezed into the bill by individual lawmakers.

For instance, the bill authorizes "$198 million for one-time payments to eligible Filipino World War II veterans as a small token of our appreciation for their service to our nation," according to a statement by Sen. Daniel Inouye (D-HI), who helped negotiate a final deal (PDF) between the House and Senate versions of the bill. "I am pleased to have had an opportunity to shepherd this provision through the legislative process, and to finally recognize these brave men for their service to our country."

Inouye also celebrated a provision that directs crop disaster money to farmers who suffered losses last year and who can’t buy agricultural insurance because their growing seasons are off-cycle, such as, well, Hawaiian sugar farmers, a group the senator has supported in the past.

An Inouye staffer deferred questions to a spokesman for the Senate Appropriations Committee, which Inouye heads. The Appropriations spokesman told us money for the Filipino vets was authorized in the stimulus bill but appropriated in an earlier measure and already debited against the Treasury’s balance.

Political observers weren’t surprised by the change in tenor. "People will point out that part of the stimulus package will go to ‘my’ constituents," said Michael Cain, the director of the Center for the Study of Democracy at St. Mary’s University in Maryland. "Politics is not about just being nice. It’s also about watching out for your constituents."

Other Democratic congressmen made a point of letting their constituents know someone was looking out for them – but drew the line at taking the credit.

Detroit can be thankful for a special provision that helps General Motors scrimp certain taxes, noted Rep. Sander Levin (D-MI), a congressman from the city’s suburbs. The provision lets the automaker off the hook for a tax liability of up to $10 billion. Rep. Norm Dicks (D-WA) was pleased to announce that Washington State will likely get $2 billion more for the ongoing cleanup of Hanford Nuclear Reservation by the Department of Energy.

Other remarks describe projects that really don’t count as earmarks, but in a new, bacon-barded tone. "Senate Passes Jobs Bill that Will Pump Money into Montana," reads the title of a statement from the office of Sen. Max Baucus (D-MT), chairman of the Senate Finance Committee. (Compare that to "Senator’s Plan to Create Jobs, Cut Taxes Advances," only a couple weeks earlier.) But the Montana money he mentions is distributed by formula through programs that will be available to all states.

These remarks contrast with the earlier tone most Democrats adopted to build support and stanch a political bleed that accelerated in proportion to the bill’s rising price tag. Stock press releases like House Majority Leader Steny Hoyer’s (D-MD) described a bill with "unprecedented levels of accountability" that "will create American jobs now" but declined to go into local details.

That level of national message discipline conflicts with most legislators’ "big political concern," said T.J. Walker, the CEO of Media Training Worldwide: "Trying to make your voters and your constituents understand your perspective."

"Everyone is against earmarks at the national level, but everyone loves their local bridge," said Walker. Communicating projects that would be helpful in their districts is part of gaining voter buy-in, but it’s not always easy to explain how a local project is good for the nation, he said.

A few stray congressmen, like Bruce Braley (D-IA), couldn’t wait for the bill to pass to give it a try. "I'm especially proud the bill includes my biofuels amendment," he boasted in a Jan. 28 statement, "providing $500 million to help biofuel makers invest in the latest technologies and create jobs in Iowa."

As Democrats disclosed more close-to-home projects to their voters this week, the Republican leadership continued using the pork label as its most effective attack. "Tell me how spending $8 billion in this bill to have a high-speed rail line between Los Angeles and Las Vegas is going to help the construction worker in my district," asked Minority Leader John Boehner in a floor statement Friday.

It turns out the rail money is to be dispersed to projects around the country, though Senate Majority Leader Harry Reid, who was also involved in the bill’s final negotiations, has sought funding for a Las Vegas-Los Angeles line in the past.

"I think that both sides are getting their message points across, but at some point, your message has to fit within a particular zeitgeist," said Walker.

Some lawmakers appear not to have made up their minds. Three Republicans voted for the bill last week, despite complaints about spending. And after it passed Friday, at least one Republican, Don Young, of Alaska, who voted against the stimulus, crowed about the fingerprints he’d left on it.

In a post-passage press release, Young took credit for deleting a provision that would prohibit no-bid contracts.

"I was approached by members of the Alaskan Federation of Native (sic.) with concerns about this provision," Young said in the statement.  "I told them that no matter if I supported this bill or not, I would make sure they were not hurt by it."

The butchered provision would have required that no funds made available by the stimulus bill could be awarded to any private organization without a competitive process to determine the recipient, a provision that was included, of course, to keep out earmarks.