The pressure is growing to force President Trump to turn over his tax returns. The other day, for example, 200 Congressmen filed a suit in federal court, arguing that voters and lawmakers have a right to know whether Trump’s businesses are violating the Constitution’s emolument clause, which bars the president from accepting payments from foreign countries.

The lead Senate plaintiff in the suit, Sen. Richard Blumenthal (D-Conn.), said that the legal effort could force release of the president’s tax returns and other business documents during the discovery stage of the litigation.

“By failing to release his tax returns — reflecting payments and benefits from foreign powers — President Trump is thumbing his nose at the American people and the Constitution,” Blumenthal told my Washington Post colleague Tom Hamburger. “He is violating the Constitution by accepting foreign government payments and benefits without consent from Congress — which can’t consent to what it doesn’t know.”

But Trump hasn’t filed a tax return for 2017, which is the year he became president and the emolument clause began to apply to him. So even if we got his earlier returns, we wouldn’t know what he’s done since taking office Jan. 20.

As for the argument that seeing his returns would expose Russian connections, should they exist: I’ve written before, his old tax returns, should they ever see the light of day, are unlikely to tell us much about any possible personal foreign entanglements.

Those might show up, if they exist, in the filings of the hundreds of companies that make up the Trump empire. But Trump’s personal returns are unlikely to show them.

But seeing his old returns would tell us something especially relevant about a president who wants to radically reshape our tax code.

It would show us how much and in what ways Trump has personally benefited from the legal loopholes scattered throughout the current system. And what impact the changes he’s proposing would have on him personally.

Trump’s tax returns would also let us see, I suspect, that a good part of the tax payments that showed up on Trump’s leaked partial 2005 federal return was refunded to him in later years.

When the first two pages of that return became public in March, he and his backers took victory laps because the return showed him paying $36.5 million of income tax and having made about $153 million during the year.

Among the boasters was Donald Trump Jr., who tweeted about his father’s 2005 payments at least three times and at a May campaign rally in Montana told a heckler that his father’s 2005 return shows that, “You can do it all. You can be successful [and] you can pay your taxes.”

However, for reasons I’ll get to in a bit, I think there’s a very good chance that Trump got a major portion of his 2005 tax refunded to him in 2006 and later. If I’m right, it means that a good part of the 2005 payments that Trump and Trump Jr. and other Trump types boasted about amounted to temporary loans to the Treasury. Not tax payments as we normally think of them.

If so, that would be yet another example of how Trump has gotten a free ride — okay, in this case a reduced-fare ride — on his income taxes.

Getting refunds like the ones I think Trump got is perfectly legal. But for us to see the 2005 tax payments but not any subsequent refunds leaves us with a misleading picture.

Should these refunds exist — I think they do, but I can’t prove it — they would show up on post-2005 tax returns that we haven’t seen and that Trump refuses to disclose.

Seeing if he got refunds on his 2005 taxes is yet another good reason for us to want to see Trump’s returns, which presidents and presidential candidates had been providing since the days of Richard Nixon.

We’d find out about possible refunds of Trump’s 2005 taxes by looking at the “Other Credits” line on the second page of those returns and seeing if he took any credits on IRS Form 8801.

I emailed both Trump’s tax attorney and the White House several weeks ago asking them to respond to my theory about Trump having gotten refunds in subsequent years. The law firm to which Trump tax attorney Shari Dillon belongs sent a quick and courteous “no comment” response. My email to Trump spokeswoman Hope Hicks went unanswered.

So I’m relying on my own analysis, which is based on information and guidance that I got from about half a dozen tax experts, some of whom I’ve worked with for decades in the course of writing about taxes. Some of the experts I consulted for this column are tax practitioners, some are theoreticians. Their political preferences range from pro-Trump to socialist.

If you look at Trump’s partial 2005 return, which made its way to veteran tax journalist David Cay Johnson (with whom I worked at The Detroit Free Press in the 1970s), who gave it to “The Rachel Maddow Show” and put it into the public domain, you see three telling things.

First, you see the words “Client Copy” on the second page, which raises the possibility that the partial return was sent by someone in Trump’s camp with access to Trump documents. Because it puts Trump in a good light, this wouldn’t shock me.

Second, you see that most of the income tax Trump paid — $31.6 million out of $36.5 million — arose from what he owed as a result of the alternative minimum tax, a provision of the tax code intended to make sure high-income people pay at least some taxes.

Third, you see that Trump used $103.2 million of losses from previous years to reduce his taxable 2005 income. Those losses were lower than his total taxable income. This almost certainly means that he had no losses left to write off, because had more write-offs been available, Trump could have used them to lower his tax bill.

Now, let me try to make sense of all this for you.

The only other Trump tax filings that are public — partial 1995 New York, New Jersey and Connecticut state returns — show that back then, he had an astounding $915 million of losses that he could use in future years to offset income for federal, New York state and New York City income tax purposes.

The 2005 return indicates to me that Trump used up his losses in 2005 — he showed $48.6 million of taxable income after subtracting the aforementioned $103.2 million of losses. I’m assuming that from 1996 through 2004, he wiped out his taxable income for federal, New York state and New York City purposes by using the $915 million in losses, which were generated by the collapse of his real estate-casino empire in the 1980s and 1990s, and were probably supplemented with paper losses generated by a special tax code provision that benefits real-estate professionals such as Trump.

Now, I’ll give you a simplified version of why I think — but hasten to say, yet again, can’t prove — that Trump recovered a good part of the $31.6 million of alternative minimum tax that he paid for 2005.

The AMT, as it’s known, has become a plague to middle-income and upper-income types who live in states with high income and real-estate taxes. That’s despite the fact that when Congress created the AMT in 1969, its goal was to stop a handful of rich people from avoiding income taxes all together. Over the years, however, Congress failed to modify the AMT sufficiently to keep it from ensnaring millions of middle- and upper-middle taxpayers.

It turns out there are two separate types of alternative minimum tax. Most people — including me — who pay AMT on top of their regular income tax do so because state and local income taxes and the real-estate taxes on our personal residences aren’t deductible under the AMT the way they are for regular tax purposes. That leads to the AMT being higher than our regular tax, and the difference between AMT and regular tax gets added to what we owe Uncle Sam.

That kind of AMT payment — arising from what tax techies call an “exclusion preference” — isn’t refundable.

But judging from Trump’s tax return, it looks like the vast majority of the additional tax he paid as a result of the AMT arose from so-called “deferral preferences.” And that most of the $103.2 million of losses he carried over from previous years were deductible for regular income tax purposes in 2005, but not for AMT purposes. 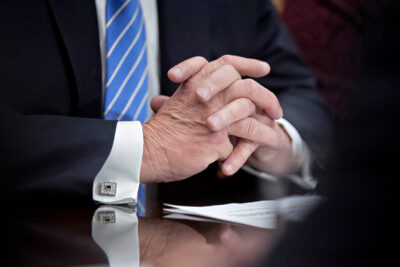 President Trump does business through a web of LLCs, and that makes it likely that basic facts are obscured, including the names of the individuals or banks to which he pays interest.

Under the tax laws, Trump can get refunds, over multiple years, up to the refundable portion of the 2005 AMT that he paid. Which was probably the vast majority of his AMT.

Because the AMT is assessed at a 28 percent rate and the top regular rate in 2006 was 35 percent, Trump’s regular income tax would probably have been $6.5 million to $7 million higher than his AMT would have been. This would have yielded him a $6.5 million to $7 million refund, with future refunds coming in future years when his regular tax was higher than his AMT.

To be sure, part of Trump’s 2005 AMT probably comes from not being able to deduct real-estate taxes on his personal residences. That “exclusion preferences” part of his AMT wouldn’t be refundable.

But the vast majority of Trump’s AMT appears to be from “deferral preferences” — especially since it’s unlikely that he paid any significant New York state or New York City income taxes from 1996 through 2004 because the losses he carried over from previous years would have been deductible for New York state and New York City purposes and would probably have wiped out all or virtually all of his New York income.

Given the size of the numbers we’re dealing with, his personal real-estate taxes and any personal income taxes he might have paid outside of New York are probably rounding errors, at most.

So unless Trump started running up big losses post-2005, when his losses dating back to the 1990s were all used up, it looks like his regular income tax (at a 35 percent top rate in 2006 and 39.6 percent in recent years) would have exceeded his 28 percent alternative minimum tax.

This means that a good part of the AMT that he paid in 2005 would likely have flowed back to him as credits in subsequent years. Hence my conclusion that although Trump paid $36.5 million of federal income tax in 2005, his ultimate income tax cost for the year was considerably lower. That’s the bottom line. Or at least, I think it is.

Of course, there’s only one way to find out for sure, and that’s to view Trump’s post-2005 tax returns. If they somehow show up at ProPublica, whose mailing address is 155 Avenue of the Americas, 13th floor, New York, NY 10013, I’ll be more than happy to look at them. Even if they prove me wrong.

I collaborated with Cezary Podkul of ProPublica on this story, and received reporting help from Alice Crites and Tom Hamburger of The Washington Post.