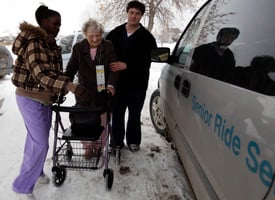 Last Thursday night, Dr. Bruce Pitts, an executive vice president at MeritCare Hospital in Fargo, ND, faced an excruciating decision. His two-campus hospital, the largest in the state, had whittled its patient population down through discharges and transfers as the Red River rose, but 180 patients remained. They included fragile babies in the neonatal ICU, complicated long term acute care adult patients, and high risk obstetrics patients. Moving them would be risky and difficult.

But just hours earlier, the predicted height of the river’s crest had jumped, and Pitts received word that a nearby dike looked vulnerable. The Department of Homeland Security was encouraging local officials to consider a city-wide evacuation. Once the sun rose on Friday, the roads would likely be clogged with volunteer sandbaggers and residents fleeing town, including those from local nursing homes. If the State mandated an evacuation of all healthcare facilities, Pitts’ hospital, whose service area is roughly the size of the state of New York, would be competing for available ambulances and busses.

Pitts and his incident command team gathered for a meeting. The mood was somber as they discussed various options. “We decided,” he said, “to pull the trigger.”

Today, as a blizzard whips Fargo, city residents are keeping a wary eye on the still-swollen Red River, whose levels are, for now, dropping. Disaster officials have rested easier knowing that fewer of the city’s most vulnerable remain, those who would have faced particular danger if a flood cut off road access and drowned city utilities such as power, drinking water and sewage services.

The successful transfer of patients from MeritCare and other local facilities stands in sharp contrast with the chaotic hospital evacuations that took place after the flooding of New Orleans following hurricane Katrina in 2005. A pattern of relatively smooth hospital and nursing home evacuations in recent disasters, including the 2008 Midwest floods and HurricaneGustav, suggests that in least some areas of the country, there has been a payoff from the increased investment in hospital disaster preparedness and regional coordination that has characterized the years since 9/11 and Hurricane Katrina.

Between 500 and 600 North Dakota hospital, nursing home and assisted living residents were evacuated last week, according to Bruce Pritschet, a state public health department employee working in emergency operations. Across the river in Minnesota, similar actions were taken. A smaller hospital on high ground, Innovis Health, took a different path, sheltering in place in Fargo.

The North Dakota evacuations faced some glitches, but thus far no patient deaths have been attributed to the transfers, and two officials in different states interviewed by ProPublica said the process ran like a “well-oiled machine.” Health workers attribute their success to flexibility, days of advance planning, and strong collaboration between health facilities and local, state and federal government, which was bolstered by twice-daily video conferences.

Some of the officials, including Pritschet, had their own disaster bona fides, having responded to the 1997 flood that devastated Grand Forks, ND. Pritschet said the response this time around went much more smoothly.

By the time the evacuation trigger was pulled at MeritCare, patients had been ready to roll for hours, baggies of medicines at their bedsides, checklists on their doors, and bar-coded triage bracelets on their wrists whose colors indicated the type of transport required. “We were actually overly prepared,” said Loretta Bartholomay, chief clinical officer at Triumph Hospital, an independently-owned “hospital within a hospital” for long term acute care patients located at MeritCare.

Still, there were some complications. Triumph Hospital had 18 patients, including four who relied on electric-powered ventilators to survive. At first the difficult transport plan for them went as envisioned. Special ambulances began arriving, and the patients were disconnected from their ventilators. Respiratory therapists—two for every patient—pumped air into the patients’ lungs by hand as they were wheeled into elevators and brought to a staging area near the ambulance exit.

But then came an unforeseen problem. “Stop, stop, they won’t take them,” someone yelled. Bartholomay learned that Abbott Northwestern Hospital in Minneapolis, the acute care hospital where her patients were headed, didn’t provide the type of long term care her patients required. It’s not clear why the problem wasn’t detected earlier. “That was a huge surprise,” Bartholomay said.

The therapists rhythmically squeezed oxygen into the patients’ lungs while Bartholomay and her colleagues searched for other options. Within about an hour, they had identified two specialized long term care hospitals willing to accept Triumph’s patients. The lesson for disaster responders? “You better be able to be a willow and bend a little bit,” Batholomay said.

Back at the state health department’s emergency operations center, other problems were emerging. Medical workers are accustomed to observing strict laws that govern patient privacy, and some were reticent about sharing the specifics of each patient’s medical needs with state officials. That made the job of matching patients with hospitals and nursing homes outside the region more challenging. The state’s web-based health resource tracking system also repeatedly froze up and crashed when health workers tried to access it to input patient data.

In the end, though, the problems proved solvable. A full evacuation of MeritCare Hospitals was predicted to take 12 hours or more. Instead, by 4am on Friday—roughly seven hours after the first ambulance rolled up to the emergency room of the main campus—only a few patients were left in the buildings. Randy Bury, the Chief Operating Officer of Sanford USD Medical Center in Sioux Falls, SD, which accepted several MeritCare patients, praised his colleagues. “It is a massive undertaking,” he said. “I think they did a fantastic job.”

Evacuees traveled by road and air to hospitals throughout the Midwest. When about 20 patients arrived at Abbott Northwestern on a bus after a four hour journey, a doctor and nurse jumped aboard to triage them, bringing those who looked poor inside the hospital first. “We drill on this and we practice for disasters and it’s kind of nice to see that it actually works,” said Gloria O’Connell a spokesperson for Abbott Northwestern’s parent company, Allina Hospitals and Clinics.

Still, the costs of a major evacuation are significant, whether measured in lost hospital revenues and health worker wages or stress to patients and their families. Perhaps the toughest situation was faced by roughly 56 hospice patients in local nursing homes, several of whom appeared to be near death when the evacuations commenced. Staff and family members waited with the patients as long as possible before moving them, said Janet Guertin, a clinical manager with Hospice of the Red River Valley. In the end, all were evacuated.