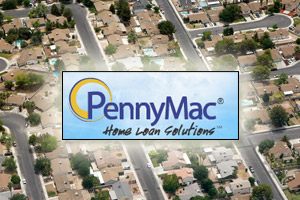 Among the servicers participating in the government’s mortgage modification program is a new recruit that's not like the others. PennyMac, a firm founded by the former president and chief operating officer of Countrywide, buys distressed home loans on the cheap with the goal of modifying them and later selling them for a profit. The company, whose top management consists mostly of former Countrywide executives, now stands to receive up to $6.2 million in taxpayer money to modify those loans, through the Making Home Affordable program. The government's incentive payments go primarily to the participating servicer, but some of the money could also go to borrowers and investors.

A March New York Timesarticle profiled PennyMac, focusing on the fact that former top managers at Countrywide were looking to profit from rehabbing high-risk loans that had failed. Countrywide, which made high-risk loans that the company’s CEO himself called “toxic” and “poison” in internal e-mails, has been widely blamed for helping trigger the financial crisis.

But PennyMac may be better suited to helping struggling homeowners than other lenders taking government subsidies are.

Housing counselors have accused many of the participants in the program of being reluctant to modify loans. As a whole, participating servicers have helped far fewer borrowers than anticipated, according to the Treasury Department’s latest data release. Over all, less than 9 percent of eligible loans had entered the trial modification period by the end of July — roughly four months since some servicers first began implementing the program – and the rate was even lower for some individual servicers. Bank of America, for instance, the nation’s largest servicer, checked in at just 4 percent of its eligible loans. Bank of America now includes Countrywide, which, with $5.2 billion earmarked for it, is the biggest participant in the program.

According to Guy Cecala, publisher of Inside Mortgage Finance Publications, servicers and investors are loath to modify loans because most aren’t convinced that it will reduce their losses.

But PennyMac’s business strategy revolves around modification, turning “sub-performing and non-performing loans” into “restructured and re-performing loans,” according to a recent company prospectus.

PennyMac buys distressed loans at fire-sale prices. In January, it purchased nearly 3,000 mortgages from the Federal Deposit Insurance Corp., which sells loans taken over from failed banks. The book value for those loans was $560 million, but PennyMac paid just $43 million. As a result, it has much more leeway to drastically reduce loan payments than banks holding mortgages at inflated values. “It can afford to lose more,” Cecala says.

“If they’re in fact doing that, I think it’s a wonderful thing,” says Margot Saunders, a lawyer with the National Consumer Law Center, who had initially been critical of the company’s provenance. PennyMac did not return calls requesting comment.

But PennyMac may have a hard time leaving behind its ties to the scandal-ridden Countrywide. PennyMac’s founder and CEO, Stanford Kurland, is facing a civil suit (PDF) brought by the New York state comptroller and New York City pension funds, blaming him for helping push Countrywide into risky lending practices and lax underwriting standards as president. Kurland admitted to the Times that he had advocated a foray into higher-risk lending but said that the riskiest practices occurred after he left the company, in September 2006. Kurland’s lawyer told the Times that the allegations were without merit.

The suit against Kurland says he was one of three executives who “became enormously -- almost indescribably -- rich from insider sales of Countrywide stock at artificially inflated prices.” Kurland sold nearly $200 million worth of Countrywide stock before leaving the company, and PennyMac was funded in part by his personal treasure chest, according to the Times.

But if you ask Cecala, “basically anyone who’s been successful in the mortgage business has been tainted” by their involvement with risky subprime loans. “At the end of the day, nothing really distinguishes PennyMac from anyone else.”

As for whether PennyMac will outdo the other participants in the government’s loan modification program, “the proof will be in the pudding,” he says.