Last Thursday, the American Medical Association apologized for its history of discrimination against African-American physicians. The apology comes on the heels of a JAMA paper published ($) by a panel of independent experts, which among other things detailed how the AMA worked to close down African-American medical schools. We spoke with one of the paper's authors, Harriet A. Washington, who last year also won the National Book Critics Circle Award for "Medical Apartheid," a history of medical experimentation on black Americans. 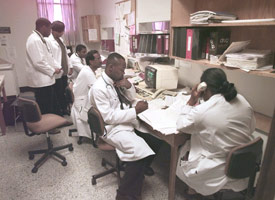 What did the AMA apologize for?

The AMA has also apologized for other decisions it made that marginalized black patients and physicians.

Why was the JAMA paper pursued now? And could you tell me about the process of putting together this historical inquiry?

In 2005, John Nelson, then-president of the AMA, visited the National Medical Association [which represents African-American physicians]. He gave a speech, and during that speech, he apologized personally. Now, because the AMA is a democracy, he could not presumed to be speaking for all of the AMA, but of course he was also AMA president.

However, the AMA could not issue an apology without going through certain procedures. And being scientists and physicians who are wedded to the concept of evidence-based medicine, they also would need documentation.

John Nelson wanted this history looked into, and yet he also understood it should not be the AMA that did the historical discovery -- that it should be independent experts. And I can say that since 2005, when we began writing the paper, we were given utterly free hand.

What was the actual mandate the AMA gave you in pursuing this paper?

Could you summarize the key findings of the paper?

Overall, the really important finding is that we took several signal events that not only dramatically illustrated the sort of bias and the sort of discrimination practice, but some of them had pretty clearly traceable long-term effects.

What sorts of responsibilities does the AMA have to correct the injustices it has committed?

The first important thing the organization has had to do it’s already done: and that is an apology. The apology is very important partly for cathartic reasons. It’s really important if you’re going to gain the trust of black physicians and black patients, to openly admit that you are divorcing yourself from the policies of the past. And that’s been done.

A few other things have also been done. There’s a commission to end health care disparities. It’s a multi-pronged attempt. They are pursuing research, legislation and changes in political practice, trying to end racial health disparities that are haunting the country.

For the future, what’s going to be very important, in my opinion, is for there to be efforts to recruit and retain black physicians not only in medical school but also in specialty practice.

Do you see the AMA serving as a model for other institutions and organizations in grappling with similar histories?

Well, I can certainly hope it will. It seems to me that there has been a trend of organizations making apologies for terrible behavior of the past. Of course, the key is for these apologies to be the prelude to real action. Words are very important sometimes -- in this case I think the words are very important -- but we will need to see more activity as well.