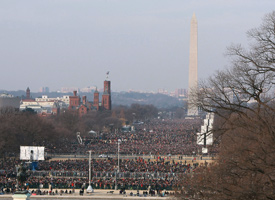 For the last two months, ProPublica has been keeping watch on the final regulatory changes of the Bush administration. Of the 65 rules we listed on our Midnight Regulations chart, 23 have gone into effect; about a third of those have gone live, so to speak, since Sunday. The big question now is what the Obama administration will do about them.

The highly contested "provider conscience" rule from the Department of Health and Human Services, which critics say is an attack on women's reproductive rights, went into effect today. According to some reports, this rule may be high on the Obama administration's list of rules to reverse and revise. A handful of states and advocacy groups have already taken legal action against the rule.

Also in effect as of today is a rule from the Environmental Protection Agency that relaxes the reporting of air pollution from animal waste on factory farms.

The Department of Transportation's rule regulating the hours of service of large truck drivers went into effect yesterday. So did a rule designed to block illegal transactions related to illegal Internet gambling.

But what about the rules that were recently proposed, in progress or scheduled to go into effect after Jan. 20?

When we started this project, ProPublica reported on the new administration's options for reversing these rules. Rules and executive orders not yet in effect may be swept away or modified relatively easily.

But the rules in effect may prove thornier; the Obama administration's options include the Congressional Review Act or re-starting the rulemaking process.

There have also been reports that Democrats in the House and Senate are preparing legislation to arm the incoming administration with more options for repealing last-minute rules.

And so today our Midnight Regulation watch moves into its next phase. ProPublica will be watching to see what rules and executive orders the Obama team seeks to eliminate or alter and how they plan to do so.