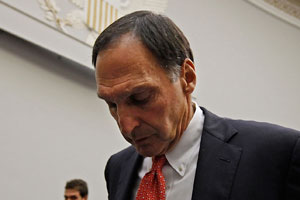 Some have called the various hearings on the financial crisis nothingmore thangrandstanding--a chance to yell at current and former bank executives and stir some public rage. But one thing these hearings do is get the bank executives on the record and under oath, and yesterday, new reports emerged suggesting that some of those executives, while testifying, may have been less than truthful.

Bloomberg reports that former Lehman Brothers lawyer Oliver Budde has come forward accusing Dick Fuld, former Lehman CEO, of understating his compensation during a congressional hearing. Fuld had testified last fall that from 2000 to 2007, his total compensation was less than $310 million. From Bloomberg:

They were too low, and he (Budde) could prove it. Fuld, he believed, had understated the amount he was paid during those years by more than $200 million, and now he had done it under oath, for the entire world to see.

Fuld's attorney told Bloomberg her client wouldn't be commenting on the allegation. "We're not giving any interviews," she said.

Mother Jones is also reporting that one Goldman Sachs executive, Daniel Sparks, may have been at least disingenuous during Tuesday's grilling by the Senate Investigations subcommittee. Sparks, who used to head Goldman's mortgage department, testified that "at the time we did those deals, we expected those deals to perform." He was referring to several mortgage-related CDOs that Goldman created and sold in 2006 and 2007, including the deal that is the subject of the SEC's lawsuit against Goldman. All of those CDOs later collapsed.

But according to Mother Jones, Sparks' testimony doesn't jibe with internal e-mails in which he expresses pessimism about the performance of the mortgage market--and CDOs--generally:

Internal documents show Sparks himself knew and often wrote about the firm's negative view of the mortgage markets and mortgage-related products ... According to the minutes of a March 7, 2007, meeting of Goldman's risk committee, Sparks delivered the following prognosis of the subprime mortgage market: "Game Over—accelerating meltdown for subprime lenders such as Fremont and New Century." He was so skeptical of the subprime industry that he told the risk committee, chaired by CFO Viniar, that the firm's mortgage operation "is currently closing down every subprime exposure possible." Meanwhile, Goldman wouldn't close its Abacus deal until the following month.

Betting against the mortgage market, as we've pointed out, isn't illegal.

We've called Goldman to get a response. "Dan was under oath and he knew he was under oath," said Goldman Sachs spokesman Michael Duvally. Duvally said he would seek comment from Sparks and would call back. We'll update the post when he does.