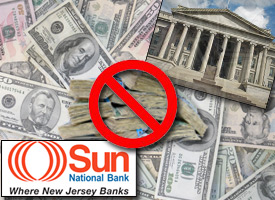 Add Sun Bancorp of New Jersey to the short list of banks that say they're giving the Treasury its money back. Sun got $89.3 million on Jan. 9.

That brings us to four banks that have announced they'll be returning the Treasury's investment. As we said earlier this week, while this is a growing trend, it's worth stressing that nearly 500 banks have received money from the $700 billion bailout.

Here's how Sun's CEO explained the giveback (via a press release):

When the Capital Purchase Program became available to well capitalized and healthy financial institutions like Sun, it was a positive partnership between the government and business to stimulate the economy through additional lending and community support. The partnership then became politicized, the rules and regulations changed, and the dynamics of the partnership substantially shifted. These changes significantly restricted the way we support our customers and communities, as well as the way we run our business.

It's an explanation that echoes remarks from the other CEOs of banks returning the money: The bailout is unpopular, there are all sorts of congressional and public pressure to lend at a high level, and they don't like the new strings attached. None of them specifically mention the biggest string of all: new restrictions on executive pay. In the case of Sun, the bank's five highest compensated executives would have seen their bonuses limited under new rules passed by Congress earlier this year.

The other banks that have announced their intention to return the money are: Signature Bank of New York ($120 million), Minnesota's TCF Financial ($361 million), and Louisiana's IberiaBank ($90 million).

Under the law, the banks must notify the Treasury Department 30 days before returning the money.