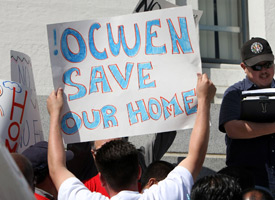 Last month, Freddie Mac introduced a pilot program designed to guide 5,000 homeowners with high-risk mortgages through the loan-modification process, but it outsourced the job to a subprime loan servicer with a history of customer dissatisfaction and run-ins with the federal government.

The Florida-based company, Ocwen Financial Corporation, is a publicly traded financial services company specializing in subprime loan servicing. When asked why it tapped Ocwen for the job, Freddie Mac spokesman Brad German pointed to recent coverage in the New York Times and Time about "the good job that [Ocwen is] doing on the job we're looking for them to do for us." He declined to say whether there had been a bidding process or how much the contract was worth, citing the information as "propriety" and referring further questions to the Federal Housing Finance Authority, which acts as Freddie Mac's conservator (PDF).

An FHFA spokeswoman declined to give ProPublica the contract details. She said that Freddie Mac, which was seized by the federal government in September, is still run as a private-sector firm and not subject to federal procurement rules. Freddie Mac will decide later this year whether to expand the program, and it may hire additional servicers for the job.

Ocwen has, in fact, had an impressive success rate with its recent loan modifications; it said in December that its delinquency rate for borrowers with modified loans was 25 percent, far below the national average of 53 percent. But its business practices have also drawn a wide array of criticism from customers, consumer advocates and the federal government itself.

Trouble With the Feds

Ocwen got a lucrative contract in 2003 to manage and sell thousands of foreclosed properties owned by the Department of Veterans Affairs, but a report from the Government Accountability Office in 2007 panned Ocwen's performance and said the "VA also has not been satisfied with Ocwen's performance": Ocwen racked up $1.3 million in penalties from the VA in the last three quarters of 2005 (at the height of the housing boom) for failing to meet sales targets.

There were other problems too: Ocwen charged the VA for home-upkeep repairs that were never made, the GAO reported. Houses fell into disrepair and were covered in "trash and debris," which the GAO suspects might have lowered property values.

Chairman of House Veterans Affairs Committee Bob Filner (D-CA) told the Palm Beach Post last January that he would recommend the VA not renew Ocwen's contract. "They obviously didnât do the job," he said. The VA transferred the job to Countrywide when Ocwen's contract expired last year.

According to Ocwen's general counsel Paul Koches, "Ocwen elected for business reasons not to seek a renewal of the VA contract... Ocwen has disputed the VA's charges for sales target shortfalls. We believe the charges are not fair in light of the precipitous drop in the housing market around the country."

But that wasn't Ocwen's only run-in with the federal government.

John Taylor, president of the National Community Reinvestment Coalition, cited those regulatory actions when criticizing the VA's choice of Ocwen in 2003. "Why would you want, when you have a repeated history of problems, to expose VA housing to a potential predator?" he asked in American Banker.

Ocwen's Koches pointed out that there was "no fine, penalty or finding of liability" in either the HUD settlement or the OTS agreement. He added, "Ocwen enjoys a good relationship with HUD, most recently confirmed by HUD's reaffirming Ocwen's highest Tier 1 rating." (HUD's tier ranking system measures only servicers' loss mitigation efforts; of the 157 servicers ranked, 111 were in tier 1.)

When Freddie Mac introduced its new program, senior vice president of default asset management Ingrid Beckles emphasized the need for strong customer service and phone counseling: "A workout strategy is only as successful as the number of knowledgeable counselors available to answer the phone," she said.

But Ocwen has ranked last in J.D. Power and Associates' survey of customer service at mortgage servicers for the last three years in a row. Frustrated customers point specifically to its tortuous and unhelpful phone services.

Koches said, "We do not believe this survey is a fair representation of our customer service performance since Ocwen was the only subprime loan servicer noted in the survey. Indeed, a customer satisfaction survey conducted by LoanSafe (a nonprofit advocate for homeowners) in 2008 ranked Ocwen in the top ten." But even in that survey, 64 percent of Ocwen customers indicated a high level of dissatisfaction with the company.

Ocwen didn't fare much better with the Better Business Bureau of Central Florida, which has received 520 complaints about Ocwen in the last 36 months and slapped it with an F, its lowest rating. Koches said, "I believe the low rating by the Central Florida BBB is not accurate... True, there are occasional borrower complaints and we do take them seriously. The numbers, however, are statistically insignificant given the large volume of loans we service, several million over the years." (As of Dec. 31, Ocwen serviced 322,515 loans nationwide, according to the company's most recent filing with the SEC.)

According to Jack Guttentag, professor of finance emeritus at the Wharton School of the University of Pennsylvania and founder of the "Mortgage Professor" Web site, loan servicing is an industry ripe for abuse because there's little financial incentive to provide good service: The "customer has already been landed and has no place to go," he writes on his Web site.

Guttentag told ProPublica, "I doubt that there are any servicers that have not been accused of predatory practices, but the ones you hear about the most are the independents -- those who service only and don't originate loans [like Ocwen]. The large originators like Wells, Chase and Citi can hurt themselves as originators by being aggressive as servicers." Ocwen has in fact been accused of predatory practices in a slew of lawsuits in the last few years. Frequent allegations include that Ocwen falsely classifies timely payments as late, charges unwarranted fees and improperly starts foreclosure proceedings.

Koches denied those allegations, saying "Ocwen absolutely does not falsely claim borrower payments are late to start a foreclosure. To the contrary, we do everything possible to avoid foreclosures." He also said, "The claims for unwarranted fees are inaccurate" and pointed to an April 2005 ruling in which a federal judge ruled that loan contracts signed by the plaintiffs authorized Ocwen to charge certain fees. That case now consists of 72 consolidated suits against Ocwen in the U.S. District Court for the Northern District of Illinois. When asked about the 2005 ruling, Laura Schlichtmann, a lawyer for the plaintiffs, told ProPublica, "The plaintiff's position is that the ruling is limited to the facts of the Soto case [one of the consolidated cases] and furthermore that it pertains to only one of numerous categories of disputed fees."

Notwithstanding Ocwen's track record, many consumer advocates were quick to praise the company's recent foray into loan modifications. David Berenbaum, executive vice president of the National Community Reinvestment Coalition, which has been highly critical of Ocwen in the past, told ProPublica that Ocwen now leads the servicing industry with regard to loan workouts. That shift signals what may be an unavoidable reality: Those looking to fix the housing crisis will have to rely on loan servicers without sterling reputations, because there aren't many out there with them.