An investigation in yesterday's Los Angeles Times revealed that for-profit firms raising money for nonprofits regularly keep large portions of the earnings. Of the 5,800 fundraising campaigns examined, profit-making fundraisers kept nearly $1.4 billion of the $2.6 billion raised -- meaning just 46 cents of every dollar went to the charity itself. As the Times notes, watchdogs say fundraisers should be passing along at least 65 cents of every dollar raised. 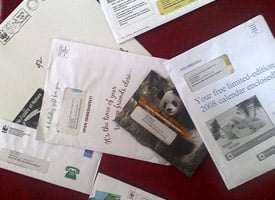 The Times article is accompanied by a searchable database that includes the amount donated to nonprofits, as reported to the state of California from 1997 to 2006. (The database presents both national campaigns that solicited donations in the state as well as California-based nonprofits.) Site visitors can sort the data in numerous ways, including a color-coded "efficiency matrix" that juxtaposes how much money profit-making vendors keep and how much of it went back to the charity.

The data illustrates some striking trends. As noted by the authors, private fundraisers raked in handsome earnings when contracted by nonprofit groups "with strong emotional or patriotic appeal -- those supporting animals, children, veterans and public safety workers, for instance."

The table below highlights charities with "emotional or patriotic appeal" that lost the most to contracted fundraisers.

According to Daniel Borochoff of the American Insitute of Philanthropy, fundraising companies seek out charities with universal appeal. "Firms go for the contracts for groups that aren't controversial. The irony is that the most popular nonprofit groups tend to be the least efficient."

Profiteers have been accused of exploiting donors' emotional sympathies for children, veterans and public safety workers in the past by creating shell organizations, prompting a hearing by the House Committee on Oversight and Government Reform. According to Borochoff, firms are most likely to target the elderly -- just as in political fundraising -- and many lock nonprofits into long-term contracts.

"A lot of the charities don't see this as their problem," Borochoff said. "They'll say that it's money they wouldn't have otherwise. But the charity chooses to forget that there's a fixed pie for what American donors will give, and that some other group won't be getting that money. Instead, a fundraiser will."