For several months in the early 2000s, Gilberto Ulibarri attached a respirator to his face each day to fix pipes in the sewers of Los Alamos National Laboratory. The air was toxic, so he kept his mask on even when he sneezed.

As the years went on, Ulibarri began to have difficulty breathing. Then, raised red welts sprouted on his face, strange growths that appeared to trace the outline of the respirator he wore. In 2015, doctors found tumors wrapped around his mesenteric artery, which supplies blood to the intestines.

By August 2017, standing before a panel of federal experts, cancer had stripped more than a hundred pounds of muscle and fat from Ulibarri’s frame.

“I worked on a drain line for eight months that had any and every chemical you can think of up in Los Alamos,” Ulibarri told the federal Advisory Board on Radiation and Worker Health during its meeting at a Marriott hotel in Santa Fe.

In 1996, at the age of 58, Ulibarri started working at the lab. That was the year Los Alamos said it was in compliance with a new federal rule that required enhanced safety and record-keeping at Department of Energy nuclear sites. If he had begun even a year earlier, he would have been deemed eligible for compensation from the government because the lab had not kept adequate records of radiation exposure. But because Ulibarri started in 1996, he was fending for himself.

Ulibarri was the 11th person to testify to the board that day about problems with safety and record-keeping at Los Alamos that they said continued beyond 1996. Most of the speakers had cancer or a deceased loved one who did. They are seeking special recognition from the government, which would allow them to more easily access benefits.

Ulibarri first applied for benefits in 2003. Part of his claim was denied four months later, and a toxic exposure claim was denied in 2006. Ulibarri, who worked for Los Alamos subcontractors Johnson Controls and KSL Services, spent nearly 15 years unsuccessfully appealing to federal officials for benefits. Officials denied two of his claims despite difficulty accessing his complete unemployment records and being unable to verify several years Ulibarri worked at the lab. Along the way, the Department of Labor said his medical conditions were too vague “to establish a definitive diagnosis … with a toxic link.”

In 2013, he appealed for a hearing with the Department of Labor, saying he wanted “to express my feelings about the work conditions I was exposed to up in Los Alamos. They were terrible.” Ulibarri told the hearing officer that the lab identified him as a worker exposed to beryllium and submitted a doctor’s note stating his breathing problems show “probable” chronic obstructive pulmonary disease.

“It just bothers me that [the lab can] send people out into job situations without knowing what’s going to happen,” Ulibarri said later in an interview. They are “blue-collar guys,” he said of his colleagues. “They don’t know what that stuff is.”

Kevin Roark, a spokesman for Los Alamos, could not retrieve Ulibarri’s medical records by deadline, saying they were stored out of state. A spokesperson for the Department of Energy said that while the agency keeps extensive records, records kept by subcontractors can be “particularly challenging” because they often remain with the company. In such cases, the Department of Energy tries to use a worker’s accident or exposure history to track employment.

In 2015, Ulibarri learned he had pancreatic cancer and submitted his last application for benefits. The Department of Labor again rejected his claim. The agency’s mathematical models estimated that he’d been exposed to just 2.73 rems of radiation over his career, which is about the equivalent of having two full-body CT scans and a chest scan. That is less than the amount of radiation the federal government allows nuclear workers to be exposed to in a single year.

At various points, federal officials said Ulibarri did not respond to their requests for information.

There were gaps in Ulibarri’s exposure records from the lab in 1996, 2000 and for four months in 2004. But the National Institute for Occupational Safety and Health said it filled in the gaps for these periods using “hypothetical intakes and environmental air concentrations” that were likely to have existed at Los Alamos at the time.

“Mr. Ulibarri’s DOE records show that he was not routinely monitored for internal dose,” his case files said, referring to urine samples that looked for markers of radiation exposure. NIOSH said in Ulibarri’s paperwork that “the lack of monitoring indicates routine exposure is less likely.”

In August 2017, Ulibarri’s wife, Charlene Maes, told the federal advisory board her husband had been “virile and strong. He’s standing before you now. He’s a sick man. All I ask is possibly that all of you will please consider expanding the [petition] date range that you have put in place before. He falls short by a year.”

“I think they hope people wear down,” Maes said later.

Gilberto Ulibarri died in May. 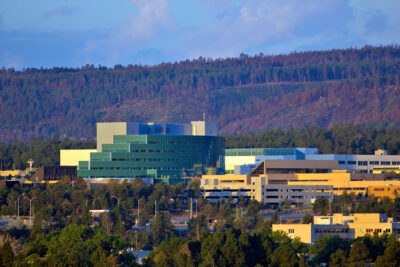 Do you work or have you worked at Los Alamos, or another national laboratory? We’d like to hear your story. Fill out our questionnaire here.