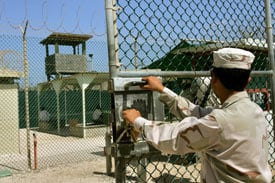 The Pentagon yesterday dismissed war crimes charges against five detainees at Guantanamo Bay. The military's short press release gave no explanation for the move. The dismissals come less than a month after the resignation of a Gitmo prosecutor who was involved in each of the cases.

The prosecutor who stepped down in protest, Lt. Col. Darrel Vandeveld, had complained that the government hadn't given the defense all "potentially exculpatory evidence."

The chief prosecutor at Gitmo disputes Vandeveld's assertions and also yesterday suggested that the government will soon re-file charges against the five detainees. "We have plenty of evidence to convict all of them," Colonel Lawrence Morris told the New York Times.

But little-noted in the news of the dismissals was the fact that the Pentagon did not dismiss charges against the one detainee who Vandeveld had suggested was essentially innocent.

Before his resignation, Vandeveld had been scheduled to prosecute the case of Mohamed Jawad, who was captured as a teenager in Afghanistan after allegedly throwing a grenade at U.S. soldiers in late 2002. In an affidavit explaining why he was leaving the prosecutor's office, Vandeveld stated that he had seen evidence supporting the defense's assertions that Jawad was a child soldier and had been "duped" by an Afghan guerrilla group who forced him to fight against U.S. troops and potentially drugged him. From Vandeveld's affidavit:

My view of the case has evolved over time. I now accept that Jawad was under the age of eighteen when apprehended, I suspect that he was duped by Hezb-e Islami Gulbuddin into joining the organization, and it seems plausible to me that Jawad may have been drugged before the alleged attack on 17 December 2002. I base these judgments on the evidence collected at the time, and not because of any sympathy for Mr. Jawad himself, whom I do not know and have only seen during Commission proceedings.

A military judge in the case also concluded (PDF) last month that Jawad had been abused at Gitmo. Among other interrogation techniques, Jawad had been subjected to what was known as the "frequent flyer" program. In one two-week period, Jawad was moved from cell to cell 112 times.

So why wasn't Jawad one of those who had their charges dismissed yesterday?

We spoke with Jawad's military lawyer, Maj. David Frakt, who said that Jawad's case is both much further along and more troubled than the others. Frakt argued that the government is going to end up dismissing the charges against Jawad, and unlike the other cases, will be unlikely to re-file them.

"Jawad is really on a separate track," Frakt told us. "The judge has specifically rejected the government's theory in the case." Last month, the judge ruled that the mere status of being an enemy combatant isn't a war crime (PDF). Though the government still has an opportunity to bring new allegations against Jawad, what amounts to the enemy combatant charge has so far been the basis of the government's case.

Jawad's trial is currently set to start Jan. 5. But Frakt doesn't see it coming to that. "The case is dead in the water," he said.

We contacted the Pentagon yesterday for its perspective on the case and have yet to hear back.