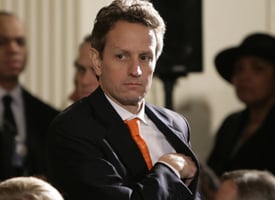 A little later this morning, Treasury Secretary Tim Geithner is scheduled to unveil how the Obama administration plans to handle the second $350 billion of the bailout. We'll have to wait for the curtain to go up to learn those devilish details, but courtesy of the major papers, we have an idea of the broad brush strokes.

First, and crucially, that expected rebranding has reportedly come to pass. As far as acronyms go, we far prefer TARP to FSP.

The Washington Post, New York Times and Wall Street Journal all agree on four major areas of the plan:

Also apparently still on the unclear list: It seems we won't learn any details about how the Obama administration will deal with the loans to the auto industry today, either.

We'll be back later when more details are available.