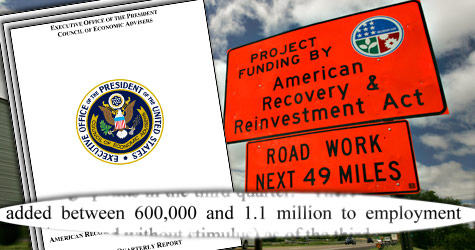 On Thursday, the president's Council of Economic Advisers released its first quarterly report (PDF) on the economic impact of the stimulus. The next day's headlines seized on a single number in the report: one million, the council's estimate of how many jobs the stimulus had created or saved. But how solid is that number?

According to the report itself, not very. "Any estimates of the impact of the ARRA at this early stage must be regarded as preliminary," noted the report, "and understood to be subject to substantial uncertainty."

Why is that? First, as we've reported before, gauging the jobs impact of the stimulus means comparing it against a hypothetical, stimulus-free scenario -- a "baseline" that can be projected but by definition never known. Such economic projections are always difficult: in January, Christina Romer, now the council's chair, predicted (PDF) that without the stimulus, unemployment would peak at 9 percent in 2010. The fact that unemployment has already passed that level only demonstrates the difficulty of estimating unknowable scenarios. (Indeed, the council itself calls its baseline "plausible" -- hardly a rousing endorsement.)

Second, even assuming the baseline is accurate, the report points out that not much time has passed since the stimulus was enacted, which makes it hard to measure actual economic performance with great certainty. "It is important to acknowledge that six months is a short period of time for macroeconomic analysis," the authors write. "The only official GDP data that we have under the program is for the second quarter of 2009," add the authors, and "one observation obviously does not constitute a trend."

Third, the report hedges its bets by giving a range for the number of jobs created or saved by the stimulus. "By August," concludes the report, "employment is estimated to be between 600,000 and 1.1 million higher than it would otherwise have been." But few news organizations took the time to report the lower number, choosing instead to focus on the more eye-catching "million" number. The Wall Street Journal, Bloomberg and the Associated Press all skipped mention of 600,00 or any range at all.

(Reporters may have been following the lead of the White House, which in February was remarkably specific (PDF) about how many jobs would theoretically be created by the stimulus in each congressional district.)

Finally, it's hard to separate the impact of the stimulus from other measures, including the trillions of dollars committed by various government agencies as part of the financial rescue. The council's report breezes past this point, saying, "This analysis indicates that the ARRA and other policy actions [emphasis added] caused employment in August to be slightly more than 1 million jobs higher than it otherwise would have been." How much of that impact came from the stimulus rather than the bailout? We'll never really know.

None of this is to call into question the quality of the report's own findings. The council supported its results by comparing them with private-sector analysis, as well as looking at the experience of other countries' stimulus packages. And the authors deserve credit for making clear the many caveats that apply to their job estimates. But caveats don't lend themselves well to headlines.