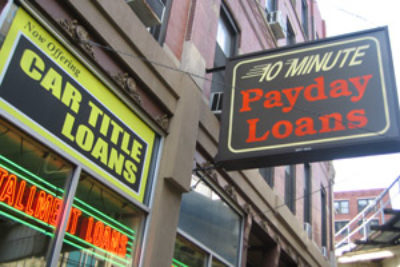 Alarmed by the explosion of high-cost lending in the state, cities across Texas have passed ordinances to prevent the cycle of debt that short-term, high-cost loans can create.

But some big lenders are finding clever ways around the laws – like giving away cash for free.

TitleMax promises to “make getting cash easy!” To get a loan, borrowers with “good credit, bad credit, or no credit” need only turn over the title to their car.

In Dallas, San Antonio, and Austin – which have all passed lending laws – those loans have come with zero percent interest.

What’s the catch? After 30 days, the loan is due in full. If the borrower cannot pay –TitleMax’s average loan is for $1,300 – the borrower is sent to another TitleMax location outside of the city, where he or she can receive a new, unrestricted loan. That loan, states a contract given to one borrower, could have an annual rate as high as 310 percent.

Of course, the borrower would be free to renew the loan at that location – over and over again.

“It’s a bait and switch,” said Ann Baddour of the non-profit Texas Appleseed. “The practice may not be illegal, but it’s definitely unethical and unconscionable.”

TitleMax declined to comment. Like other high-cost lenders, the company touts its products as an option for borrowers who might not qualify for other sources of credit.

An auto-title loan is similar to its better known cousin, the payday loan – but larger and with more at stake. Typically, the borrower hands over title to her car and agrees to pay off the loan after one month. If she can’t do that, she can pay only the interest due and roll over the principal to the next month.

As with payday loans, the cycle can repeat itself over and over. A study by the Consumer Federation of America and Center for Responsible Lending found that the average borrower renews a loan eight times. A borrower who defaults risks having her car seized. (Disclosure: The Center and ProPublica both get significant funding from The Sandler Foundation.)

In six TitleMax contracts from Texas reviewed by ProPublica, the company actually charged an annual rate ranging from 145 to 182 percent.

TitleMax’s ploy is the latest example of high-cost lenders’ ingenuity when confronted by unwanted laws. In Texas, at least eight towns and cities have passed lending ordinances in the past two years.Together, the new laws cover over four million Texans.

The ordinances come at a time of explosive growth for TitleMax’s parent company, TMX Finance, one of the largest title lenders in the country. The company has more than 1,200 stores across 14 states and will soon move into its 15th.

In its home state of Georgia, TMX boasts more than 300 locations – more branches than any bank. (Wells Fargo and SunTrust come closest with around 280 branches statewide each.). The company has doubled in size since 2008 and says it plans to keep up the same rate of growth.

TMX’s growth is especially evident in Texas, where it has opened more than 150 stores in the past two years. It continues to operate in cities that have passed ordinances. Under the names of TitleMax and TitleBucks, for instance, TMX operates a total of more than 80 stores in Dallas, Austin, and San Antonio.

Last December, Texas’s regulator for payday and auto-title lenders announced –  without naming TitleMax – that it was “concerned” about the practice of offering a zero percent loan to customers in those cities. The offer might prove too tempting to someone who might otherwise never take out an auto-title loan, said the regulator in a bulletin to lenders: “This business model could also be perceived as a deceptive practice because it appears calculated to bring the consumer into the store with the promise of one product, but later effectively requires the consumer to go to another location to purchase another product.”

In a statement to ProPublica, Dana Edgerton, spokeswoman for the Office of Consumer Credit Commissioner, said that the agency was not aware of any other lenders besides TitleMax offering a zero percent loan.

Despite their concerns, state regulators do not have authority to enforce the city’s ordinances, Edgerton said. It can only warn lenders of potential consequences – a warning TMX has not heeded.

High-cost lenders in and around Denton

Other high-cost lenders inside Denton

Other high-cost lenders outside Denton

The city of Denton’s lending ordinance, which passed in March, prohibits payday and auto-title lenders from renewing borrowers’ loans more than three times. “That was the biggest thing, just having some kind of end point,” said Kayce Strader of the non-profit Serve Denton and a volunteer for the local alliance Denton for Fair Lending..

As soon as Denton’s law went into effect, according to a class action lawsuit filed in June in state court, TitleMax notified its current customers there would be a change. They would no longer be able to renew their loan in Denton. Instead, customers had a choice: They could pay off the loan in full or accept a zero percent loan. That loan, in turn, would not be renewable at the Denton location. But, the notice says, “We want you to know that we will work with you during this transition period.”

Where to go, then? TitleMax also has a location 15 miles down the highway in Flower Mound, Texas, the notice says. “[You] may want to consider doing business” there, and once you’ve switched, “you can continue transacting at that location,” it says.

According to the suit, the named plaintiffs all got caught renewing TitleMax loans over and over. One allegedly renewed her loan 23 times, paid at least $10,800 in fees, and after all that still owed $3,961. Another, the suit says, renewed her loan twelve times. By switching such customers to a location outside Denton, TitleMax would have been able to continue renewing the loans without restriction.

The suit charges TitleMax duped customers into thinking they were paying down their balance when they were in reality just paying the same fees again and again. TitleMax denies the allegations and is contesting the suit. The company’s attorney declined comment.