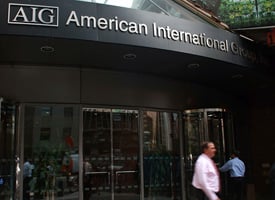 With the financial markets still teetering, yesterday's New York Times took a step back and did some forensic reporting, explaining how insurance behemoth AIG imploded.

The Times points its finger at a "freewheeling little 377-person unit in London" that dealt in -- you guessed it -- credit-default swaps. In terms of people power, the office barely registered. The company has nearly 120,000 employees and operates in 130 countries.

But the office, known as AIG Financial Products, raked in the dough. The Times reports that in 2005, it brought in nearly 18 percent of all of AIG's overall operating income. As of last year, its portfolio of swaps stood at $500 billion. And incidentally, employees in the unit seemed to do quite well, with compensation for the small office going up to a total of $616 million in one year.

As you might know by now, credit-default swaps operate as a kind of insurance. If you held bonds or fancy mortgage-backed derivatives, you could buy swaps from AIG to protect against defaults in your underlying investments. But there are a few differences between swaps and insurance as we know it:

Of course, perhaps the most important difference is that the swaps are unregulated. But here the Times has an intriguing tidbit that suggests a more complex picture. It notes that while AIG's swaps office "did not have to report to state insurance regulators," the trades were routed through a bank and thus "were reviewed routinely by an American regulator, the Office of Thrift Supervision." The Timescontinues:

A handful of the agency's officials were always on the scene at an A.I.G. Financial Products branch office in Connecticut, but it is unclear whether they raised any red flags. Their reports are not made public and a spokeswoman would not provide details.

There certainly do seem to have been some things worthy of checking out. According to the Times, in February AIG auditors "identified problems in the firm's swaps accounting." This summer, federal prosecutors said they were looking into the company's accounting.

Whether the swap's office actually cooked the books is at this point unknown. But the office's impact on AIG overall is plenty clear. According to the Times, "At the end of A.I.G.'s most recent quarter, the London unit's losses reached $25 billion."