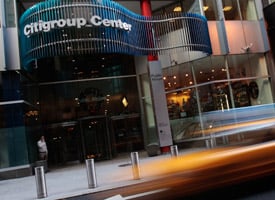 It's tough keeping up with the bailout: the alphabet soup of last-ditch government programs and growing list of companies saved from oblivion. It's not made any easier by the fact that every time the government steps in to save a company that's too big to fail, the strategy changes.

The government's bailout of Citigroup is different from the Bear Stearns, Fannie Mae and Freddie Mac and AIG bailouts. It's most clearly put this way: The government has agreed to absorb up to $247.5 billion in losses in exchange for a $7 billion fee.

The losses would stem from the government's guarantee of Citi assets worth up to $306 billion -- these are loans and securities "backed by residential and commercial real estate and other such assets," according to the government's term sheet. Citi is on the hook for the first $29 billion in losses. After that, the government would absorb 90 percent of the losses. For that service, Citi has issued $7 billion worth of preferred stock to the government.

The big question, of course, is whether that will be enough. Since late last year, Citi has taken about $30 billion in losses in its subprime mortgage-related holdings. But the losses on assets actually on Citi's books aren't the ones investors have been worried about. From the Wall Street Journal:

In addition to $2 trillion in assets Citigroup has on its balance sheet, it has another $1.23 trillion in entities that aren't reflected there. Some of those assets are tied to mortgages, and investors have worried they could cause heavy losses if they are brought back on the company's books ...

Despite the unprecedented scope of the rescue plan, it's not clear whether it will be enough to stabilize Citigroup. The roughly $300 billion pool of assets that are included in the rescue plan represent only a sliver of the company's more than $3 trillion in assets, including its holdings in off-balance-sheet entities.

Jitters about such "hidden" assets helped trigger the nose-dive in Citigroup's stock last week. Among the off-balance-sheet assets are $667 billion in mortgage-related securities.

Despite this new "radical plan," as the New York Timescalls it, Citi's executives and stock holders emerge from this deal much better off than those at AIG or Fannie and Freddie. Citi's CEO will remain in place, and the government does not have the option of seizing 80 percent of the company's common stock, as it does with AIG. Some sort of limits on compensation for Citi's execs will be devised and Citi's dividend has been slashed to $.01 for the next three years -- but that's it. The reason for the difference, reports the Washington Post, is that in the cases of AIG and Fannie and Freddie, "the institutions were considered insolvent, justifying action by federal officials to punish shareholders and fire the chief executives."

Given Citi’s grave problems, however, there is already broadskepticism that this move will save Citi from that fate.