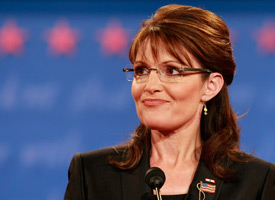 So what are the campaignâs proposals for getting rid of the greed and corruption on Wall Street?

Last week, we looked at what exact changes the candidates have proposed for the financial system. What we found is that Senator McCain has often inveighed against corruption on Wall Street — and has offered few detailed proposals for addressing it

In terms of the mortgage industry, McCain has called for a system to "punish individuals who engage in fraud.â The McCain campaign has not said what new laws or "system" he is proposing.

McCain has called for increased transparency at âfinancial firms,â though he has not said what form that should take. In other areas — regarding rating agencies, hedge funds, and regulating the complex investments that have fueled the current crisis — we were not able to find proposals by McCain.

We called the McCain-Palin camp earlier today and asked them to forward details on their proposals for getting rid of the greed and corruption on Wall Street. Weâve yet to hear back.

âWhat I would do also, if that were to ever happen, though, is to continue the good work he is so committed to of putting government back on the side of the people and get rid of the greed and corruption on Wall Street and in Washingtonâ¦.

âWe have got to not allow the greed and corruption on Wall Street anymoreâ¦.

âThere was greed and there is corruption on Wall Street. And we need to stop thatâ¦.

âAgain, John McCain and I, that commitment that we have made, and we're going to follow through on that, getting rid of that corruptionâ¦.â