The Acting Cook County Public Guardian filed a class-action lawsuit Thursday on behalf of hundreds of children and teenagers in state care who have been held in psychiatric hospitals after they had been cleared by doctors for release, calling the practice inhumane and unconstitutional.

The Illinois Department of Children and Family Services has a constitutional responsibility to ensure that children in the department’s care, whose lives are already marked by trauma, are not unnecessarily held in psychiatric hospitals, according to the lawsuit, which was filed in federal court in Chicago.

“The effects of holding children (beyond medical necessity) are heartbreaking at an individual level and staggering when multiplied among all the children who have been subjected to the practice,” the lawsuit claims.

The lawsuit follows a ProPublica Illinois investigation in June that found nearly 30 percent of children in DCFS care who were sent to psychiatric hospitals between 2015 and 2017 were held there after doctors had cleared them for discharge. The children were hospitalized for a collective total of more than 27,000 days, or nearly 75 years.

The unnecessary hospitalizations cost the state millions of dollars.

ProPublica Illinois found that DCFS spent nearly $7 million on medically unnecessary hospitalizations between 2015 and 2017. In addition, the lawsuit alleges that the state could have saved an additional $3.4 million if DCFS had discharged the children to the next most expensive placement.

The lawsuit, which seeks unspecified monetary damages, was filed on behalf of Cook County Acting Public Guardian Charles Golbert and names more than a dozen former patients, though it says hundreds of children ultimately will join the lawsuit. It named as defendants DCFS, the agency’s acting director, Beverly “B.J.” Walker, and previous directors dating to 2008, as well as other DCFS employees tasked with tracking or finding placements for children in psychiatric hospitals.

“It’s hard to imagine a more profound violation of a young person’s civil rights,” Golbert said. “It must stop.”

DCFS would not comment on the lawsuit but said finding placements for children is challenging. Some residential treatment centers and foster homes won’t accept children in psychiatric hospitals with serious mental or behavioral health conditions, said Neil Skene, special assistant to Walker.

The agency is working build additional services and reduce the need for hospitalization, Skene said, but the problem is part of a larger issue related to rebuilding the state’s mental health system.

“The availability of community resources and facilities to handle complex behavioral and physical health needs of children and teenagers is a serious need in Illinois,” Skene said. “This is a decades-long problem in Illinois that has now fallen to the current leadership of DCFS. We are at the deep end of a challenge within the healthcare system.”

The number of children being held beyond what is considered medically necessary has increased in recent years. In 2017, 301 psychiatric hospital admissions of children in DCFS care went beyond medical necessity, a sharp rise from 88 in 2014, according to DCFS figures.

The lawsuit, which does not use the children’s full names to protect their privacy, lists a litany of harmful emotional and psychiatric effects of prolonged hospitalizations. They include isolation, loss of liberty and schooling, and missing out on family connections. The children are subjected to a “dangerous environment” where some act out physically and sexually, according to the lawsuit.

“Lengthy hospitalizations tend to erase any gains made by children during the medically necessary portion of their stay, and over time many children exhibit more psychiatric distress than they presented with at admission,” the lawsuit alleges.

One child, Stephen W., was held in the hospital after he was cleared for discharge three times in 2014 and 2017, the lawsuit alleges. Last year, Stephen needed medication to help him sleep and cope with feelings of worthlessness and a fear that DCFS would not be able to find him a placement, the lawsuit alleges.

Another child, Alana M., was 13 in November 2014 when she was admitted to a psychiatric hospital with depression. She was still grieving the death of her adoptive mother, who had taken her in as a newborn, when she learned her adoptive grandmother had been diagnosed with late-stage cancer.

In an interview with ProPublica Illinois, Alana said she made progress in her first weeks at the psychiatric hospital and was ready for discharge by early January. She had an older sister in Indiana who wanted to take her in, but the DCFS approval process dragged on for months. As Alana waited, she said she grew more depressed. Her adoptive grandmother died while Alana was in the hospital. Alana said she tried to kill herself as a way to escape.

“I felt trapped,” she said. “I did everything I was supposed to do, but there was no point.” 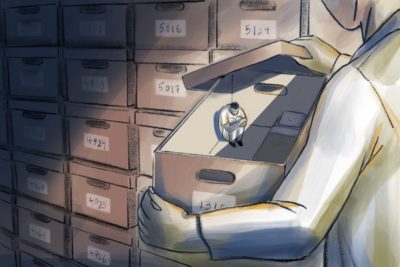 An employee, who was later fired, forced her to perform sexual acts on him, according to the teenager and child welfare records. She was bullied by other girls at the hospital. By the time she left, she had been hospitalized for six months, 4 ½ of which were beyond medical necessity, and had not been able to go outside that entire time, the lawsuit alleges.

In a final blow, her doctors concluded that her prolonged stay had worsened her mental health to the point she could no longer move to her sister’s house but instead needed to be placed at a residential treatment center, the lawsuit alleges.

Alana said the lawsuit offers a glimmer of hope for children in an otherwise hopeless situation.

Skylar L. said her depression also worsened as she waited to be discharged from a psychiatric hospital in 2015. She celebrated her 16th birthday at the hospital and missed out on valuable schooling, the lawsuit alleges.

“I was always crying,” she said in an interview. “Who wants to be stuck in a hospital that long?”

She called her education at the hospital “a joke.” While group therapy was helpful at the beginning, she said, it quickly lost its benefit because “it was the same thing over and over again.” She said she constantly felt tired because of the medication she was given.

When Skylar was finally released, five months after she was admitted, she said DCFS placed her at a group home where some of the residents tried unsuccessfully to recruit her into a sex trafficking ring. She said she ran away for more than a month before returning to the group home and was eventually placed at a residential treatment center.

Several other plaintiffs named in the lawsuit are much younger. One boy was 5 when he was held beyond medical necessity at a hospital for two months in 2015. During that time, he couldn’t get special education services or meaningful therapy, the lawsuit alleges, and was only discharged following a court order.

The law firm Loevy & Loevy, which is best known for representing people who claim they were wrongly convicted, filed the lawsuit on behalf of Golbert and the former patients. Lawyer Russell Ainsworth said he see parallels between those who were forced to spend years wrongly imprisoned and the children locked in psychiatric hospitals.

The firm has represented ProPublica Illinois on open records and open meetings matters.