Amending emergency rules put in place two weeks ago, the Illinois State Board of Education says it will again allow schoolchildren to be physically restrained in positions it had banned, though only in crisis situations.

The change comes after several schools said they could no longer serve some students with behavior issues because of the new restrictions, put in place after publication of a Chicago Tribune/ProPublica Illinois investigation that found overuse and misuse of “isolated timeouts” in public schools across the state.

The change, made Tuesday, temporarily allows schools to restrain children in prone (or face-down) and supine (or face-up) positions. But they can only do so in “narrow circumstances and only for severe crisis situations to protect the safety of students and staff,” the board said in a statement. School employees must try other methods to calm students before resorting to restraint, the amendment states.

The board said it still expects schools to start phasing out the use of prone and supine restraints.

The state board filed emergency rules on restraint and seclusion Nov. 20, the day after the publication of the ProPublica Illinois/Tribune investigation.

The news organizations documented more than 20,000 incidents of seclusion, called isolated timeout in Illinois, in 15 months. The reporting found that in thousands of incidents, students had been put in seclusion for disobedience, refusing to do schoolwork and other reasons not related to safety — in violation of state law. Most of the children secluded across the state have disabilities, the investigation found.

The emergency rules immediately barred schools from putting children in locked, isolated seclusion and now require schools to alert state officials within 48 hours of putting a student in seclusion with an adult. ISBE previously did not monitor schools’ use of seclusion.

The rules also prohibited physical restraints that could inhibit a student’s breathing, including prone and supine restraints. Those restraints are sometimes called “floor restraints.”

But some parents and school officials said the quickly drafted rules on restraints had unintended consequences. Some out-of-state, private facilities that educate Illinois public school students who have higher needs because of their disabilities notified parents that the facilities would have to send their children home. The emergency rule applied to all Illinois public school students, including those whose school districts place them in private or residential schools.

ISBE spokeswoman Jackie Matthews said the state board heard concerns from at least eight schools that were considering withdrawing dozens of students, as well as from parents and their attorneys.

Cheryl Zens, whose 17-year-old son Nathan attends a residential school in Ohio for students with autism, said school officials told her that Nathan would have to leave if they didn’t have the option of using floor restraints.

“It created a really quick crisis for some families. It was so black and white,” said Zens, of Naperville. She said Nathan is restrained infrequently but when he is, it is to keep him and those around him safe. “It was a quick decision with no replacements or suggestions of what to do instead.” 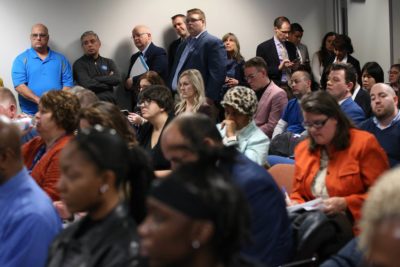 A group of parents and staff from Giant Steps, a Lisle school that serves students with autism, also protested, saying that the school used prone restraint safely and effectively and that their children needed that type of intervention.

The school’s director said that without the ability to use prone restraint, they would have to call 911 or send the students home.

At least half of U.S. states ban restraints that can restrict breathing. Children have died, often of asphyxiation, in prone restraints, including at school.

While the Illinois emergency rules no longer ban those restraints, the rules limit their use and add more review to the process. The rules require that a staff member trained in recognizing signs of distress observe the student during the entire incident. Additional review is required if a student is restrained in a prone or supine restraint two or more times within 30 school days.

If the restraints would impair a student’s ability to breathe or communicate, they still can’t be used even with the relaxed rule. And schools still cannot physically restrain students who, because of medical or psychological issues, would be at greater risk with restraint.

Advocates for people with disabilities, including Chicago-based Equip for Equality, a federally appointed watchdog, helped craft the emergency amendment.

“Given the pervasive use of these practices by schools across Illinois, we understand why ISBE concluded they needed to give schools time for intensive retraining of staff and provide other supports to ensure students are treated in a nonviolent manner that does not cause trauma and risk serious physical harm, including death,” said Zena Naiditch, president and CEO of Equip for Equality.

Naiditch said she hopes that setting a higher standard for the use of floor restraints will eventually lead to similar changes in the use of all types of restraint.

The emergency rules, including Tuesday’s amendment, expire after 150 days. The state is seeking to make the restrictions on seclusion and restraint a permanent part of Illinois law. So far, two state legislators have introduced bills that would outlaw seclusion of any kind. That does not include sensory spaces for students who need to calm down.

The ProPublica Illinois/Tribune investigation revealed children were put in isolation every school day for reasons that violate the law. Reporters obtained records documenting more than 20,000 incidents of seclusion from the 2017-18 school year and through early December 2018.

Of those, about 12,000 included enough detail to determine what prompted the timeout, and in more than a third of those cases, school employees documented no safety reason for the seclusion. The Tribune and ProPublica Illinois also have been investigating restraint of children and asking officials about its use.

After the investigation published online, state Superintendent Carmen Ayala apologized to families and said the law that had been in effect “did not sufficiently regulate” isolated timeout, causing “lasting trauma.”

Deputy Gov. Jesse Ruiz filed complaints on behalf of children highlighted in the story, and the state promised to investigate their treatment.

ISBE investigators who believe school employees committed crimes against children will refer those individuals to law enforcement, and those who investigators believe abused or neglected students will be referred to the Department of Children and Family Services, a state board spokeswoman said. 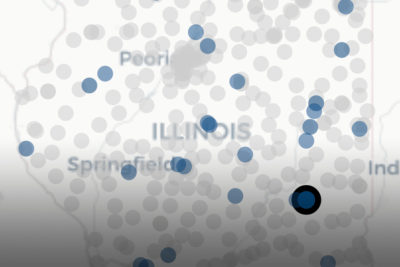