The Illinois State Board of Education voted unanimously Tuesday to adopt rules that prohibit the use of locked seclusion rooms and stop schools from using prone restraint, making Illinois’ permanent regulations more restrictive than they’ve ever been.

But under pressure from a group of special-education schools, the board stopped short of enacting a ban on involuntary, solitary seclusion in the state’s schools as it had planned after a Chicago Tribune and ProPublica Illinois investigation in November revealed widespread misuse of isolated timeout and restraint in schools.

ISBE will allow schools to place students alone in seclusion rooms when they are “engaging in extreme physical aggression” and it would be unsafe for an adult to be in the room with them. But seclusion rooms can no longer have locks and employees can’t hold the doors shut to keep children inside.

The measures still must be approved by a separate state rule-making agency before they become permanent. To put them in place immediately, ISBE simultaneously submitted them as emergency rules.

“It is not going to be perfect. … We will have to see how this plays out,” he said. He suggested reviewing their effectiveness in six months.

While modified from ISBE’s original plan, the new rules are still stricter than the previous law, which was enacted 20 years ago and allowed locks on the doors and all types of physical restraints. The changes were prompted by “The Quiet Rooms” investigation in November, which found that school districts across the state were using the interventions as punishment and in other ways that violated the law.

The investigation led Illinois education officials to write emergency rules for seclusion and restraint that schools had to follow while awaiting the permanent ones the board voted on Tuesday. The emergency restrictions banned all isolated timeouts, requiring adults to be in the room with students.

In addition to banning locks, the new permanent rules list specific scenarios when timeout and restraint are prohibited. The previous rules directed schools to use seclusion only for “safety” reasons, but the new ones go further, spelling out that seclusion isn’t to be used “as discipline or punishment, convenience for staff, retaliation, a substitute for appropriate educational or behavioral support, a routine safety matter, or to prevent property damage.”

Students also have to be released from isolated timeout “immediately” when they no longer are in “imminent danger” of seriously hurting themselves or others. This is a departure from the prior law that allowed a student to remain in isolation for 30 minutes after the behavior ended.

The permanent rules also set stronger requirements for staff training; parental notification; and, for the first time, state monitoring. Schools must notify ISBE within 48 hours of putting students in timeout or restraining them. In the past, schools were required to document the interventions but there was no official oversight.

The rules draw a distinction between isolated timeout, which is an involuntary confinement of a student alone, and a student-requested break, which can include time in a sensory room with tools to help calm a student. Schools now must ensure that students have access to food, water and bathrooms, and employees can’t take away clothing, including shoes. “The Quiet Rooms” investigation exposed instances when students urinated or defecated in seclusion rooms and were required to remove their shoes, hooded sweatshirts and other items before being placed inside.

ISBE opted to allow supine, or faceup, floor restraint only in emergencies that present an “imminent danger.” The rules also will force schools to conduct a “supine review” when students have been restrained in a supine position twice in a 30-day period. The review is meant to require school workers to consider whether the restraint is effective and whether there’s another, less-restrictive way to manage the student’s behavior.

Cheryl Jansen, public policy director for the state disabilities watchdog organization Equip for Equality, was not happy with the board’s decision to move away from a total ban on isolated timeout.

“We believe the proposed rules have been seriously weakened and that they fail to adequately protect students from these dangerous and traumatic practices,” Jansen told board members before they voted.

The rules now go to the state Joint Committee on Administrative Rules for a second notice, then approval. Separately, state lawmakers are considering a full ban on seclusion, as well as other measures that could override ISBE’s rules.

“While the final rules are a step forward from where the state was a year ago, the General Assembly should still act to protect children in this state by banning involuntary isolation,” said Kyle Hillman, director of legislative affairs for the National Association of Social Workers.

In November, state Superintendent Carmen Ayala and ISBE immediately banned isolated timeout, saying they were “appalled and deeply saddened by the horrifying instances” detailed in “The Quiet Rooms” stories.

ISBE recently completed its own investigations into seclusion at eight school districts highlighted in the Tribune/ProPublica Illinois series, finding that six of them used it unlawfully. And the state board collected three years’ worth of seclusion and restraint incident reports from every school in the state.

Many of the same special-education schools that have relied on seclusion and restraint to control student behavior pushed back on an all-out ban, arguing that the practice is necessary to keep students and employees safe from the most physically aggressive children.

Cynthia Pratt, a special education teacher at Colene Hoose school in Normal, told ISBE members Tuesday that the modified rules take a “step in the right direction,” particularly by permitting students to be isolated alone. She asked, however, that locks be allowed on rooms to keep students from running away. She also said ISBE should require all school employees to be trained in de-escalation techniques, not only employees who work most often with students with disabilities.

More than 300 members of the public sent comments to ISBE as part of the rule revision process. Nearly half the comments came from people affiliated with just 10 Illinois schools or districts, a fraction of the more than 900 public and private school entities in the state.

At least 45 of the comments came from a single private school: Giant Steps, based in suburban Lisle, which serves about 160 students with autism.

Giant Steps, which has four seclusion rooms, advocated for what it called “deviations” from the law because employees felt some of their students needed involuntary timeout. Employees there told reporters last week that only about eight students at the school exhibit behaviors that warrant seclusion. 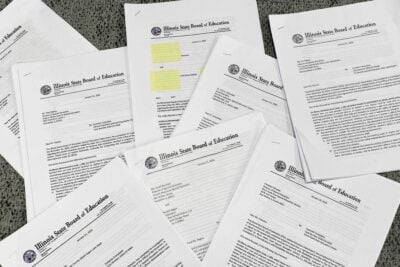 The school hosted an open house for legislators last month and provided ISBE with proposed rules language, according to the school’s director and lawmakers.

Giant Steps employees and supporters said they’ve pushed hard to keep isolated seclusion legal because the school wouldn’t otherwise be able to keep students with the most challenging behavior in school during a crisis.

“We are able to help most students manage their behavior. However, without these tools, helping students who are in an intense crisis becomes very difficult,” said the school’s director, Sylvia Smith.

Many of the educators who weighed in on the rules during the 45-day comment period agreed that some of their colleagues’ seclusion practices had been rightly criticized, but they wanted exceptions to stricter seclusion and restraint rules for themselves.

Commenters from the A.E.R.O. Special Education Cooperative in Burbank spoke out en masse in favor of prone, or face-down, restraint. A.E.R.O. used prone restraint at least 530 times in the 15-month period examined by reporters for “The Quiet Rooms,” by far the most often of the 100 school districts analyzed for the investigation.

Kevin Rubenstein, president of the Illinois Alliance of Administrators of Special Education, said the latest version of the ISBE rules provides “a good middle ground.” He had previously called for a ban on all isolated timeouts.

“School districts are in a situation now where we need to do a lot of training,” he said. “A bright light has been shined upon a really dark corner and we will do a great amount of work to make sure students are safe in schools and that the practices that were identified in these articles are not continuing in inappropriate ways,” he said.

To tell reporters about seclusion practices at your child’s school, email [email protected].